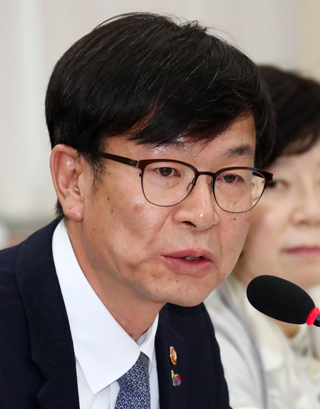 “There have recently been a lot of comments about whether the government’s policy direction has changed,” Kim said during an interview with KBS on Sunday. “I stress that the direction will continue.”

“I have yet to feel that the president’s commitment to reform has either changed or decreased,” Kim added.

Kim’s comments came in response to concerns that the government’s drive for key achievement - such as the 52-hour workweek - has diminished.

After facing backlash from business regarding the shortened workweek, the government has pushed for “flexible working hours” in which workers can clock more than the 52 hours a week under certain conditions.

“It’s a process of making flexible adjustments to the direction based on the changes to the economic environment,” said Kim.

The chairman also rejected criticism that the government’s plans to reform the country’s large family-owned conglomerates conflict with its recent efforts to cooperate with business to develop new industries.

“Visiting Samsung Electronics and meeting Vice Chairman Lee Jae-yong is something that the president has to do,” explained Kim.

Nicknamed the “chaebol sniper” for his outspoken criticism of large conglomerates, Kim emphasized that industry development depends upon broad participation.