Koreans are famous for their love of pork belly, or samgyeopsal. Among many options, refrigerated domestic pork belly has been the most popular.

But recently, there has been a noticeable increase in the demand for alternatives, such as imported, frozen pork belly or even other parts of the pig, like the neck and back. In the past, they were less in demand.

Imported frozen pork belly prices are half those of domestic competitors, at an average 993 won per 100 grams on May 2. This was a 7-percent drop from the same day last year and 9 percent lower than the five-year average. For domestic refrigerated pork belly from large food brands, prices are up to five times those of imported prices. 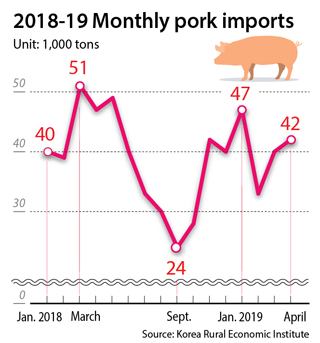 “The average pork belly prices for January and February were lower than the five-year average,” he said. “A month ago, temperatures were unusually low, and this hindered the growth of pigs and lowered production.”

Frozen imported pork belly is currently around 30 percent and 40 percent of the samgyeopsal market and has been gaining share every year. A demand booster was the price promotions by discount chains and e-commerce sites. “Daepae samgyeopsal,” pork belly in very thin slices, has been promoted at “1 kilo at max 10,000 won.”

The price gap between imported and domestic pork bellies is evident online. Imported frozen pork belly is sold at 760 won to 1,390 won per 100 grams, while some products from domestic regions famous for pork, like Jiri Mountain or Jeju Island, were priced as high a 5,200 won per 100 grams.

Popularity of pork belly itself is on the rise as eating outside has become more expensive, explained Lee Jin-won, TMON’s chief operating officer.

Another issue may affect local pork prices in the future.

Chinese pig farms were affected by the African swine fever starting from last August. The U.S. Department of Agriculture believes this will increase China’s demand for imported pork by 40 percent this year.

“According to changes in the Chinese market, this year’s imports are forecast to decline around 17 percent - already importers are making efforts to secure products” said KREI’s Lee.