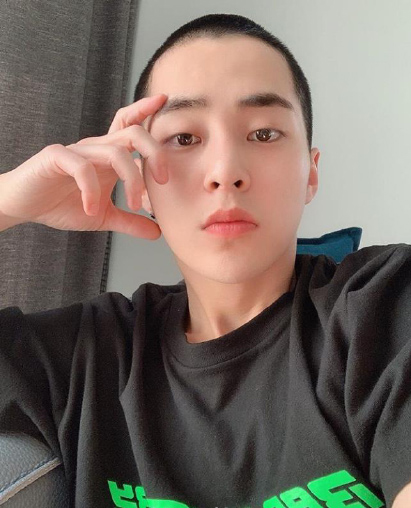 Xiumin, a member of K-pop boy band Exo, uploaded a photo of himself sporting a military-style haircut hours before officially beginning his military service on Tuesday.

The 29-year-old, whose real name is Kim Min-seok, entered a military boot camp in Gangwon to start his 21-month stint as an active-duty soldier.

On Saturday, the singer officially said farewell to his fans at a fan meeting event titled “Xiuweet Time” at Jamsil Indoor Stadium in southern Seoul. Xiumin is the first member of Exo to temporarily leave the band to fulfill his mandatory military service.

On Thursday, the singer will release a solo track titled “You.” The song is said to be dedicated to his fans for their support over the years.

Also on Tuesday, Kyuhyun of Super Junior was discharged from the military after fulfilling his duties as a public service worker. The singer is the last of the boy band’s 11 members to complete his mandatory service.

Kyuhyun will hold a fan meeting on May 19 and perform at the upcoming Seoul Jazz Festival from May 25 to 26.