Robots get to work at cafeterias

Robots get to work at cafeterias 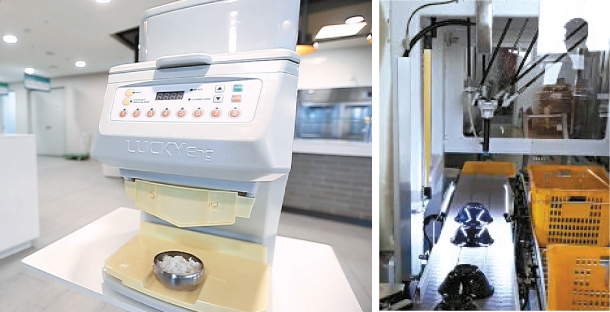 An automated stacker that sorts dishes, left, is being tested by Samsung Welstory. When clean dishes are aligned on top of the conveyor belt, the robot arm puts them into a box. The rice dispenser, right, is a machine that scoops up a fixed amount of rice after a button is pressed. [SAMSUNG WELSTORY]

Korea’s cafeterias will start abiding by the 52-hour workweek starting from July, and the regulation is already changing the landscape of cafeterias.

Robots are taking over key jobs at these corporate cafeterias.

Last Friday at lunchtime, kitchen staff were busy serving food at a company cafeteria at Tree Apples Cosmetics in Incheon. The company has around 500 employees.

On the outside, the view was not much different from any other company lunchroom. But one thing stood out.

Instead of employees taking care of the dishes, machines were doing the work.

There was not a single person dishwashing, drying or even sorting the dishes.

In January, Samsung Welstory became the first cafeteria service company in Korea to adopt an automated dish sorting system. Robots pick up the dishes that have been cleaned and dried and place them into a box.

The conveyor belt, which is roughly 5 meters long (16 feet), works like a well-oiled machine at a cutting-edge automated car factory.

After going through a dishwasher, a dirty soup bowl was placed on the conveyor belt. A camera called “vision” started to analyze information of the soup bowl from its size to its location.

The analyzed data is then sent to an artificial intelligence robot called “Delta,” which hangs on the ceiling.

Robotic arms with a vacuum pad suck up the bowls and place it on the plastic boxes.

“In the past, there were five people working in the kitchen,” said Yoon Ji-hoon, a cook in the corporate cafeteria. “Today, we only have four, as one has been replaced by a machine.”

But the coexistence of men and machines in the kitchen is still a work in progress.

“Work hasn’t all become convenient, since the conveyor belt doesn’t align completely with the flow of staff movement,” said another cook.

An automated stacker that sorts different dishes is still being tested.

“We applied the system [at the cosmetic company cafeteria] for the first time since we started developing it last year,” said a Samsung Welstory official. “We plan to install this system at other corporate cafeterias starting this month.”

The official said once the full module automated dishwasher and “Delta” robots are introduced, it will raise the efficiency of managing kitchen staff by 40 percent.

Companies are pushing to raise work efficiency by applying robots because of the burden to labor costs resulting from minimum wage hike as well as the shorter workweek, which will be applied to cafeteria companies starting in July.

“Institutional meal service is a type of business where the prime costs are high,” said Kim Sung-hyun of the food service innovation team at Samsung Welstory. “We have no other choice but to raise work efficiency through automation.”

Kim added that this efficiency will be the greatest at large corporate cafeterias where more than 2,000 dishes are served a day.

The role of machines, such as robots in these corporate cafeterias, is expected to expand.

With a push of a button, a robot scoops up the appropriate amount of rice. The previous Japanese model was only able to serve 50 bowls of rice, and the machine itself was expensive, so Samsung Welstory decided to develop its own.

According to the company, the new rice dispenser means that staff don’t have to put rice in bowls before customers arrive. This allows customers to get hot, steaming rice the moment that they push a button. Customers can also choose the amount they want via 10-gram (0.35-ounce) increments.

Currently, Samsung Welstory is also testing a payment system that uses facial recognition at another cafeteria. The company says it is near commercialization.

Not only can it read a person’s face, it can determine if the person is holding up a tray or not in real time and charge the person automatically.

“This lifts the additional workload for the staff and, for customers, saves time that they would have to spend tagging their office cards for payment,” said a Samsung Welstory official.

Samsung Welstory is the largest institutional food service company in Korea and provides over one million meals a day at roughly 700 cafeterias.

According to the Financial Supervisory Services, last year Samsung Welstory made 1.81 trillion won ($1.55 billion) in revenue. That’s a 5 percent increase from the 1.73 trillion won it made in 2016.

While revenue increased slightly, costs were up. Employee wages in 2016 were 18.4 percent of the company’s total cost. That increased to 19.1 percent in 2018.