Both the defense ministry, NIS play down tests

Both the defense ministry, NIS play down tests 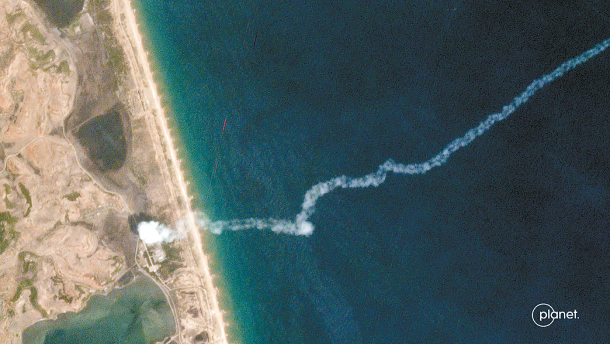 A commercial satellite image captured by Planet Labs, a private earth imaging company, over the Hodo Peninsula in North Korea at 10:54 a.m. on May 4, shows what analysts at the Middlebury Institute of International Studies at Monterey believe is the launch point and exhaust trail of a new short-range ballistic missile test in the North. Picture taken on May 4 and released on May 5. [REUTERS/YONHAP]

South Korea’s Defense Ministry told lawmakers on Tuesday that the projectiles North Korea launched over the weekend probably did not include a short-range ballistic missile (SRBM) - an analysis that dovetails with recent efforts by Seoul and Washington to downplay the significance of Pyongyang’s tests.

According to Rep. Ahn Gyu-back, chairman of the National Assembly’s National Defense Committee, briefings by the Defense Ministry and the Joint Chiefs of Staff contained a determination that the barrage of unidentified projectiles fired by the North on Saturday was likely less of a provocation than a target exercise.

“It is the tentative conclusion [of the ministry] that if [the North] meant to provoke, the launches would have happened at an undisclosed location in the early morning as in earlier cases,” Ahn told reporters about the briefings. “But [the recent drills] took place at nine in the morning in an open place, which strengthens the idea that they were target practice.”

The Defense Ministry added that an SRBM did not appear to be included among the various projectiles fired on Saturday, contradicting press reports that suggested Pyongyang may have violated United Nations resolutions by testing ballistic missiles, if not the intercontinental ones that produced so much alarm in Washington.

Ahn claimed this showed that the projectiles in question - which the North called “new-type tactical weapons” in state media reports - were not short-range missiles. He admitted that a more detailed analysis needed to be conducted since 10 to 20 types of projectiles were fired on Saturday, including artillery pieces.

Moreover, according to Ahn, the fact that the North’s “strike drills” were overseen by a senior artillery officer of the country’s military rather than by Kim Rak-gyom, the head of Pyongyang’s Strategic Rocket Forces, suggested the weapons have a tactical rather than strategic purpose. Tactical weapons are mainly designed for deployment against immediate military targets, while strategic weapons usually have greater yields and are designed to damage the enemy’s overall capacity to wage war.

The decision to broadcast North Korean leader Kim Jong-un’s supervision of the drills on Saturday by state media was likely intended as “a signal to South Korea and the United States,” Ahn added.

On Monday, the deputy chief of the South’s spy agency, the National Intelligence Service (NIS), told the legislature’s Intelligence Committee that Saturday’s launches by the North had an “element of pressure aimed abroad” but fell short of an intention to derail dialogue altogether.

Based on the North’s recent public messaging, the NIS also assessed the provocative nature of the drills were minimal compared to Pyongyang’s actions in the past.

“The North’s state media stressed that [the launches] were a regular drill, using such phrases as ‘a regular exercise that is defensive in nature’ or ‘combat readiness posture all the time’ that make it difficult to conclude they were meant to be provocative,” Kim Sang-gyun, the NIS deputy chief, reportedly told lawmakers. “In the past, [North Korea] put out aggressive reports including threats of a pre-emptive strike, but this time the tone of their commentary focused on the fact that the [South] also conducted drills.”

According to the NIS analysis, the North’s tests may have been a response to a series of joint land, sea and air exercises between South Korea and the United States that kicked off Saturday.

Kim also said the North was deliberately modulating the level of aggression in its messaging to the United States, as testified by the later deletion of a phrase in an English language state media report that originally said Pyongyang would “retaliate without an inch of consideration” if the United States threatened its independence and livelihood.

Regarding whether the weapon tested may have been a missile, the NIS deputy deferred a response saying an analysis was still ongoing, but added that the rocket’s physical appearance suggested it was purposed to strike at targets on the ground.

In addition to a general silence on the matter from the presidential office, the South Korean government has shown total restraint in dealing with the launches.

In a regular press briefing, Choi Hyun-soo, the Defense Ministry spokesperson, on Tuesday called the North’s launches “very alarming” in that they undermined a joint pledge made by both Koreas to work towards diminishing military tensions in an agreement signed by defense chiefs at the third inter-Korean summit in Pyongyang on Sept. 19.

While Choi said the letter of that agreement does not explicitly ban the kind of tests undertaken Saturday, they contradicted a mutual written understanding between the two sides on the necessity of reducing tensions.

This was followed by a briefing by a press officer of the South’s Joint Chiefs of Staff who explained that the North’s projectiles flew approximately 70 to 240 kilometers and reached an altitude of 20 to 60 kilometers, which fell short of the typical range of a short-range ballistic missile. This could be one of the reasons why Seoul has shown reluctance to make such a classification.

Military analysts, however, have a much less sunnier view of the North’s tests.

In South Korea, a host of military experts said the new tactical weapon fired by the North resembled the 9K720 Iskander, also known as SS-26 Stone, a Russian short-range ballistic missile system that Pyongyang first displayed mounted on transporter erector launchers (TEL) in a military parade last February. Footage from Saturday’s launch showed an Iskander-like rocket launched vertically from a TEL like those seen in the parade.

The Iskander is known to be a sophisticated surface-to-surface missile system equipped with the capacity to fly at low altitudes that allows it to evade some of the most advanced missile defense systems from the United States. While the missile’s operational range is believed to be around 400 to 500 kilometers, North Korea may have modified its version of the weapon to reduce the range to around 240 kilometers for Saturday’s test.

Jeffrey Lewis, director of the East Asia Nonproliferation Program at the Middlebury Institute, backed up the likelihood of a SRBM launch in a phone conversation with the JoongAng Ilbo on Monday, saying the satellite images his institute obtained on the launch showed the North possessed a “serious capability” to strike almost any target within the Korean Peninsula.