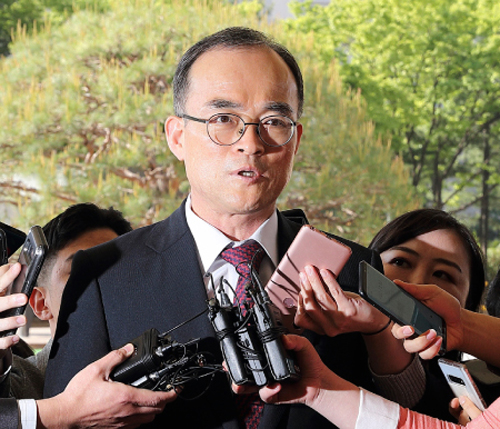 Korea’s top prosecutor softened his public criticism of the Moon Jae-in administration’s attempt to rebalance investigative powers of the prosecution and police.

“It is fortunate and thankful that a consensus is developed that the National Assembly needs to have an in-depth discussion on the issue,” said Prosecutor General Moon Moo-il on Tuesday as he entered the Supreme Prosecutors’ Office in the morning.

That was a step back from earlier criticism of the Blue House and ruling party for a reform initiative that will curb the prosecution’s powers.

“The prosecution is having introspection on the causes of criticisms of its past practices and trying to present alternatives,” the top prosecutor said Tuesday. “We believe in judicial control over an investigation, and that the opening and closing of an investigation must be clearly differentiated in order to fully protect people’s basic rights.”

Moon also hinted that he won’t immediately resign in protest, saying that he wants to persuade lawmakers of his case in the coming weeks. “If the National Assembly asks for my attendance, I will fully prepare, attend hearings and give answers,” he said.

After the National Assembly decided to fast-track a series of bills changing the powers of police and the prosecution, Moon issued a strong objection. “Law enforcement procedures must function in accordance to democratic principles,” Moon said in a statement release by the Supreme Prosecutors’ Office on May 1 during an overseas trip. “But the bills that were fast-tracked at the National Assembly currently go against the democratic principle of checks and balances.”

He cut his trip short and returned to Korea on Saturday. Moon made public his intention to fight the bills, threatening to step down from his post.

The Blue House tried to calm the top prosecutor. Cho Kuk, senior presidential secretary for civil affairs and the architect of the reforms, posted a message on Facebook Monday saying the prosecutor general’s concerns must be taken into account.

“If the bill to redistribute investigative powers between the prosecution and police is passed, the police will have the primary right to close an investigation and concerns were made that the police will become too powerful,” Cho wrote. “A plan has already been prepared to give prosecutors rights to control probes that are closed by the police, but the concern must be properly resolved. Prosecutor General Moon’s concerns deserve close attention.”

The top prosecutor responded to Cho’s olive branch on Tuesday by saying, “I took it as signifying we need an in-depth discussion.”

Experts said the prosecutor general has softened his stance because the legal community, academia and politicians accepted the prosecution’s complaints and called for more discussions to reflect their positions.

The Korean Association of Criminal Procedure Law is preparing a statement to oppose the fast-tracked bill on redistribution of investigative powers. Two ruling party lawmakers also publicly expressed their opposition to the bill.

Prosecutor General Moon hosted a meeting of senior officials from the Supreme Prosecutors’ Office on Tuesday and discussed the prosecution’s countermeasures. According to Yonhap News Agency, Moon told the senior prosecutors that he opposed the bill, which would give the police the primary right to close an investigation without handing it over to the prosecution.

Once the prosecution decides on its position, Moon is expected to appear at a Special Committee on Judicial Reform and present it in the coming weeks.