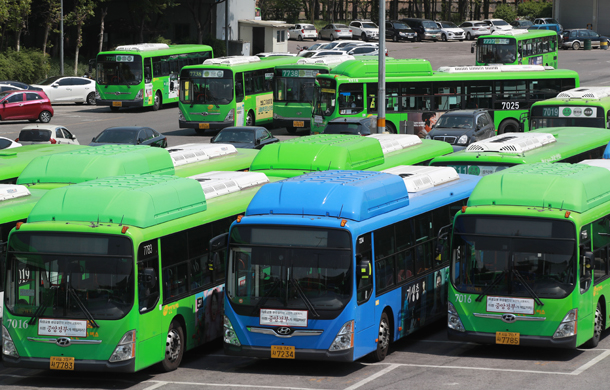 A major transportation crisis is looming after bus drivers in Seoul voted to strike May 15, joining bus drivers from other regions including Gyeonggi.

The bus drivers are demanding increase in their wages ahead of a shorter workweek starting in July as fewer working hours will inevitable translate into smaller paychecks.

According to the Korea Automobile and Transportation Workers Federation on Thursday, 89.3 percent of 16,043 bus drivers from 61 bus companies in Seoul voted to strike while 469 opposed and 33 invalidated their ballots.

Bus drivers in Seoul, despite earning the biggest paychecks of all bus drivers in the country, are demanding a 5.98 percent increase in wages and an extension of their retirement age from 61 to 63.

Also on Thursday, 96.2 percent of bus drivers at eight out of 15 bus companies in Gyeonggi voted in favor of next Wednesday’s strike.

The remaining seven companies are still in the process of holding votes.

The eight companies already in favor of the strike account for 43 percent of the 589 buses traveling between Gyeonggi and Seoul daily.

The Gyeonggi union has been demanding that the companies raise drivers’ monthly wages from an average of 3.1 million won to the level earned by bus drivers in Seoul, which is around 3.9 million won.

“While it’s good that I would have more break time, I’m worried about the smaller wage,” said a 46 year-old bus driver raising two sons, a 12 year old and seven year old.

“In November I received 4.16 million won in pretax wages for working 25 days including bonuses,” said Lee. “But under the 52 workweek, I will be restricted to only 22 days, which means I will only take home 3.06 million won pretax.”

The driver said he currently works 60 hours a week, which helps him bring home roughly 3.5 million won a month.

“But after spending on our living expenses, children’s tuition as well as paying off our apartment loan and medical bills, there’s not much to live on,” Lee said.

He said bus drivers in Gyeonggi are trying to move to bus companies in Seoul or drive airport buses, which offer higher pay and a regular bonus every two months.

As of Thursday, bus drivers in Busan, Ulsan and South and North Chungcheong provinces voted to strike.

Seoul bus drivers started voting on whether to join the strike on Thursday while Incheon bus drivers are planning to vote later today.

If Seoul drivers joins in, a major transportation crisis is expected. The drivers in Seoul, despite having the biggest paychecks of all bus drivers in the country, are demanding a 5.98 percent increase in their wages and an extension of their retirement age from 61 to 63.

One of the biggest problems bus companies are facing is safety risks, as new drivers they recruit will be inexperienced.

The central government has remained on the sidelines, repeatedly saying the current tensions should be solved on the local government level.

“It is time for the central government to intervene if it hopes to achieve its goal of securing a safer bus transportation system and create quality jobs,” said an official at the Korea Automobile and Transportation Workers Federation.