Take a ride on Hyundai’s wild side

Take a ride on Hyundai’s wild side 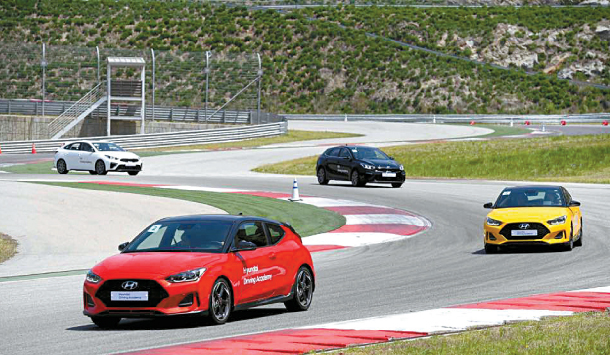 INJE COUNTY, Gangwon - Hyundai Motor Group today launched a new driving experience program based at a circuit in the mountainous area of Gangwon to prove to customers that its cars have a wild side.

Hyundai Motor has occasionally held driving experience events since 2016, but the newly-established program marks the first time the group’s three car brands - Hyundai Motor, Kia Motors and Genesis - have come together to roll out a regular program that will run throughout the year.

Although, quite how regular that will be isn’t entirely clear yet. The program doesn’t run every day, but each carmaker will host experience events on a regular basis, according to the auto group Thursday.

The attempt comes as the auto group braces to rebrand its cars as dynamic and powerful vehicles, not just good value for money.

From emergency braking to slalom driving and circuit racing, the driving experience program is offered at four levels starting with beginners at level 1. The auto group rented out a motor racing circuit and driving training space in Inje Speedium, Gangwon, rather than building its own center like BMW’s Driving Center near Incheon International Airport.

Before the program opened to the public, the Korea JoongAng Daily visited the venue on Wednesday to get a first-hand feel for the dynamic driving experience Hyundai promises to offer.

This reporter participated in the level 1 beginner program, trying her hand at a mix of slalom driving training, emergency braking and circuit experience. At first glance, the beginner course really did seem to be for beginners. A 20-minute lecture on how to position the driving seat and steer the car had this reporter worried that it might be too simple.

It became clear that wasn’t the case when the slalom course began. Zigging and zagging through a series of rubber cones with speed turned out to be far from simple. As 10 reporters from various news organizations attempted the course in either a Hyundai Veloster or Kia Motors’ K3 GT, cones were sent flying in all directions - or just squashed. Steering needed to be fast and acceleration sensitive to stop the car’s tail from knocking over the cones.

More difficult was the emergency braking session where drivers were told to drive at full speed for roughly 100 meters (328 feet) and then brake in a specific square zone marked out with rubber cones.

This reporter, too scared to drive at full speed, slowed down even before reaching the zone and gently came to a full stop in the square - 10 points for accuracy, but very little attempt at emergency braking. The instructor pointed out that practicing emergency braking is important, encouraging participants to go wilder.

On the second and third trials, the car sped up to roughly 60 to 70 kilometers per hour (37 to 43 miles per hour) and this reporter hammered down the brake to come to a real emergency stop. The Kia K3 GT stopped almost immediately, responding faster than expected with a loud screeching sound.

Things got more difficult after that. The next level of emergency braking involves turning left or right while stopping to avoid obstacles. The instructor told drivers to move right or left only at the last minute to simulate an emergency situation. More than a few cones were sent flying as reporters struggled to time the brake and turn correctly.

It was a heart-pounding experience to drive in these extreme situations, but potential visitors should be aware that the instructor did say the course was made tougher for reporters than for general customers.

The last part of the experience was held on the actual motor racing circuit. At Inje Speedium, the circuit is roughly 3,908 meters long with 19 turns. Level 1 trainees only get to run on half of the circuit, but on Wednesday the full circuit was open for reporters. The instructor drove in front so other cars could follow in lines. There were rubber cones at corners to help drivers follow the most effective routes inside the circuit.

Compared to the 2.6-kilometer circuit at the BMW Driving Center, the circuit in Inje County is longer and has more highs and lows, the instructor from Hyundai said.

The total program lasted for about three hours without a break. The first program that launches today is run by Hyundai Motor. The price of the level 1 program is 50,000 won ($42) for those driving an Avante and 60,000 won for those choosing Veloster. Level 2 programs are more expensive.

Hyundai is hoping its high-performance N branded cars and its general lineup can gain recognition for their power driving and updated image through the experience program.

Setting up driving centers to bolster brand image and promote sales is a strategy that has been adopted by other automakers as well. BMW built its driving center in Korea in 2014 and is in the process of expanding its current circuit. Mercedes-Benz launched its own driving academy programs in November last year by renting out an existing facility in Yongin, Gyeonggi.