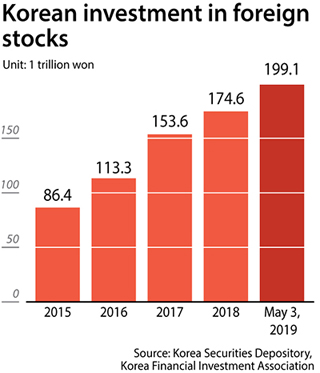 It’s not just individuals with huge portfolios diving into the foreign markets. Regular wage earners have also joined the movement and started directing their funds to overseas shares.

Experts talk of the everyperson “Mr. Kim” and “Ms. Kim” and say that what is happening now is similar to what transpired during Japan’s lost decades.

“We saw a good response introducing a service that allows people to buy and sell fractions of expensive foreign stocks,” said Pyo Yoon-mi, head of the global brokerage team at Shinhan Securities.

“There are customers who purchase 0.04 percent of an Amazon share by depositing 100,000 won a month and those who buy 0.01 percent of a Starbucks share while drinking coffee.”

Numbers support the trend. The total amount of direct and indirect investment in foreign stocks reached 199.13 trillion won ($169 billion) as of May 3. Experts believe the amount could easily break 200 trillion won by end of this month.

According to the Korea Financial Investment Association, investment foreign funds totaled 153.03 trillion won on the same date. Foreign stocks held at the Korea Securities Depository (KSD) were valued at $39.4 billion.

Korean investors are required to deposit their overseas stocks and bonds with securities depository after purchase.

“Local investors are concerned as profitability of domestic shares is strikingly low despite abundant cash flow,” said Yang Seung-ik, a director at KB Asset Management. “People are increasingly looking to use their money, including their retirement funds, to invest in foreign markets.”

The benchmark Kospi, after peaking at 2,602.81 on Jan, 29, crashed below 2,100 momentarily mid-Friday. Analysts said the index came under selling pressure from growing concern about Washington’s steep tariffs on Chinese products.

U.S. President Donald Trump increased tariffs on $200 billion worth of Chinese products to 25 percent, from the current 10 percent.

Foreign stocks have also become popular for the Mr. Kims and Ms. Kims as the U.S. Federal Reserve continued to increase the Fed Funds Rate. Korea’s base rate of 1.75 percent is far lower than that of the benchmark in the US, with is at 2.25 to 2.5 percent.

Amazon was the most popular foreign stock for local investors. According to the KSD, Koreans have traded around $760 million worth of Amazon shares so far this year. Local investors also traded more than $200 million each of Microsoft, Nvidia, Alphabet and Apple shares.

“Having studied design, I had a huge interest in Apple,” said a 26-year-old designer surnamed Han. She was rewarded with dividends and huge capital gains as Apple’s share price rose nearly 30 percent after she bought the company stocks through a local securities company in January.

“I felt good from being an Apple shareholder and even receiving dividends,” she said, adding she also benefited from the depreciating value of won against dollar. “Many of my friends also say they will invest in foreign stocks after I boasted about it.”

The investment habits of the Mr. and Ms. Kims have also become an important factor in the foreign currency market, as they are partially responsible for the depreciating local currency as they are selling won and buying dollars to make securities purchases.

The local currency closed at 1,179.80 won against the dollar Thursday, up 10.40 won from the previous session. It is a 28-month low for the won, as investors searched for safer assets due to uncertain trade negotiations between the United States and China, the world’s largest economies.

“The won is not likely to appreciate anytime soon,” said Seo Jeong-hoon, an analyst at KEB Hana Bank. “Concerns are growing over the trade dispute, the weakening Korean economy and the risk of North Korea’s military action.”

Yet foreigners continue to net purchase Korean stocks and bonds, bringing some relief to experts who had warned of a mass exodus of foreign investors.