When 26-year-old Lee Hae gets stressed out, she looks for spicy food. 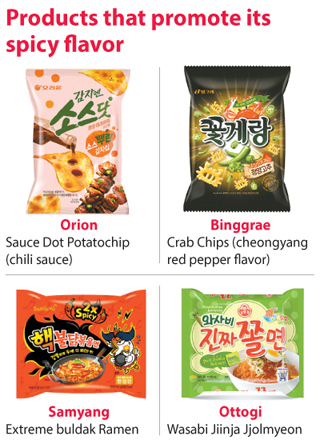 “Lately, I have been frequently eating hot pot, and I am addicted to its unique piquant taste that is hard to get in Korean food,” Lee said.

Housewife Kim Min-kyung, 42, is worried about her family searching for spicy food day and night.

“When my children see extremely spicy food posted on social media or get stressed while studying, they look for spicy food,” Kim said.

“So I always prepare spicy ramyeon or ready-to-eat meals in my house.”

Many are finding comfort through spicy food today as they try to sweat out the stresses of a challenging economy.

In scientific studies, spicy food has been found to stimulate the brain and emotions as it produces positive hormones, such as serotonin, that relieve stress, depression and anxiety.

Because of this effect, the demand for spicy food is usually high in times of economic trouble.

The main difference with previous eras of difficulty is the Chinese hot pot, which has become one of Korea’s more popular foods.

Companies are competitively rolling out foods with Chinese hot pot flavors, one after another.

From snacks to ramyeon, spiciness is raised with the use of cheongyang red peppers, which is considered to be one of the hottest in the country.

Hot pot is now trendy to the point where social media is replete with posts on the food.

Witnessing the huge demand for the spicy, the food industry is releasing products with other lively flavors, including cheongyang red peppers and wasabi.

This product is flavored with sweet teriyaki sauce along with the cheongyang red peppers.

The potato chip was developed to target people who are living alone, especially as the number of people living alone has been on the rise, and more people today enjoy sipping on a beer with a simple snack on their own at home.

According to the company, it has received favorable responses from people who have tested the snack.

Some commented that the chips went well with beer as it is not only spicy but also sweet and salty.

Some also said that the cheongyang red pepper’s spiciness is particularly refreshing.

The snack “was created to become a new trend that would become popular among young people drinking alone or trying to relieve stress.”

The Scoville Heat Unit indicates the degree of spiciness by measuring the concentration of capsaicin. Samyang Food’s Buldak series recorded 282.5 billion won ($240 million) of sales in 2018, and since its first release, 1.5 billion ramyeon packs have been sold.

The product is developed to catch the trend where the young add wasabi to jjolmyeon, a spicy and sweet noodle dish.

The product went viral, and 300,000 packs were sold in four months.

“Hot flavor is iconic at times of economic recession,” said Suh Yong-gu, professor at the Sookmyung business school. “When the economy is gloomy, people tend to look for spicy food to get rid of stress.”

He added that food seasoned with hot flavors contribute to stomach-related ailments.