Start-up market is booming, but exits are too few

Start-up market is booming, but exits are too few

While start-up investment in Korea is steadily increasing, the country is still lacking in unicorns and successful exits, according to a report Monday.

An “exit” is when company founders and early-stage investors are able to sell their holdings to the public or to a strategic investor, creating incentives for new investment and allowing for the recycling of capital. 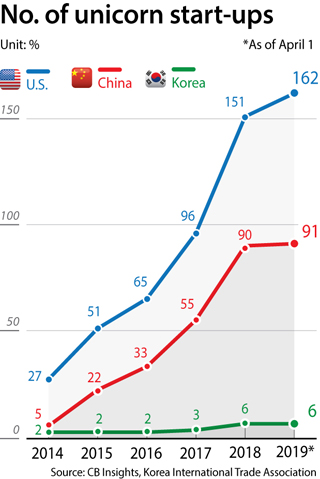 The data were included in a report by the Korea International Trade Association (KITA), which compared the start-up ecosystem of Korea, the United States and China.

Between 2013 and 2015, 138 Korean start-ups received seed money or angel investments, which are given to very early stage businesses. Among them, only 8, or 5.8 percent, had successful exits as of last month.

In the United States, 12.3 percent of 8,667 start-ups exited during the same period.

Kim Bo-kyung, KITA researcher and author of the report, said that Korea’s active seed and angel funding were the result of government policies encouraging crowd funding and the offering of tax benefits to angel investors.

“Compared to the other two countries, Korea’s start-up ecosystem recently expanded in terms of quantity, but there was a shortage of exits and scale-up investments for companies in the growth stage,” she said in the report.

“Our task is to create an ecosystem based on the virtuous cycle, to help new industries grow to spur attractive start-ups and encourage venture investment from the private sector.”

Kim added that reforming regulations in fields like fintech, health care and mobility will help to boost start-up investment in the country.