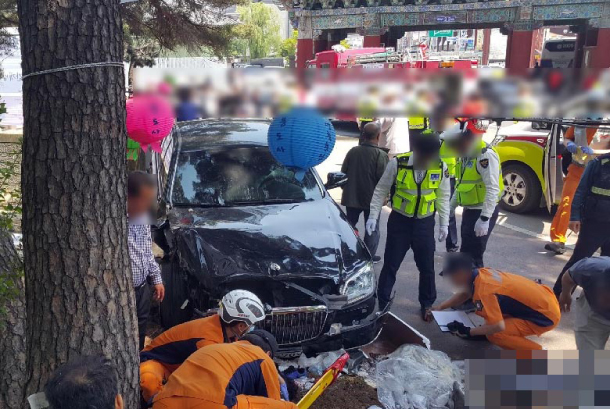 Police officers and firefighters rescue people who were injured by a car accident at Tongdo Temple in Yangsan, South Gyeongsang, on Sunday as they were on their way to celebrate Buddha’s Birthday. [SOUTH GYEONGSANG PROVINCIAL POLICE AGENCY]

Peaceful celebrations of Buddha’s Birthday at a temple in Yangsan, South Gyeongsang, on Sunday turned fatal after a 75-year-old man rammed into 13 people near the temple’s front gate, killing one and injuring 12 others.

The driver told police that his domestic luxury sedan was to blame, claiming it suddenly accelerated for an unknown cause. Police, however, aren’t buying the explanation and are putting more weight on the possibility that he’s a poor driver. The vehicle is scheduled to undergo examinations by the National Forensic Service and the Road Traffic Authority for a closer, more objective look, officers said.

A 52-year-old nurse in Gimhae, South Gyeongsang, was killed in the accident. Her mother, aged 78, is currently in critical condition, as are seven other people. Four others sustained minor injuries.

According to officers at Yangsan Police Precinct who investigated the vehicle’s black box, the suspect, who was only identified by the surname Kim, drove pass the front gate of Dongdo Temple at around 12:50 p.m. on Sunday at a normal speed. After driving about 20 meters (22 yards) more, the black box showed Kim’s car reaching the side of a bridge within the temple compounds, when it suddenly sped toward people who were on the bridge. Police booked Kim on the charge of violating safe driving laws and questioned him Sunday without physical detention. Kim is expected to go through another round of questioning today, after which police will decide whether to ask a local court to detain him before his trial.

Officers said Kim was sober during the accident and that his medical records indicate he has no illnesses. Kim’s vehicle was covered by comprehensive insurance, meaning an insurance company will likely compensate the victims, police said. Kim was said to have been hospitalized for injuries as well, though they are not life-threatening. The husband of the woman who died Sunday, a 55-year-old surnamed Yoo, told the JoongAng Ilbo that she left home telling him she would go to the temple with her mother to pray for good luck for their daughter, a high school senior preparing for the national college entrance exam.

“I never knew she’d go like this,” Yoo tearfully said Sunday at his wife’s mourning altar, which was set up at a hospital in Ulsan. “I thought it was strange she couldn’t be reached for so long that day, because it was past the time she should be back home.”

“She spent all her life working for our family,” Yoo continued. “I feel so bad that’s all she ever did when she was alive.”

Yoo and his family lived in Gimhae, South Gyeongsang, about 18 kilometers (11 miles) southwest of Yangsan, where the accident occurred. Yoo explained that his wife worked for 30 years as a nurse at operating rooms in the nearby city of Changwon.

“I don’t know how to explain her death to our daughter,” Yoo said.

Yangsan police officers said it took some time for them to identify the dead victim and her injured mother, because unlike others who were accompanied by other family members, the two were there alone. Police realized they were mother and daughter after they checked the dead victim’s cellphone and pressed a number that was saved as “Mom.” The cellphone of the injured victim, who was receiving surgery at that time, rang.

Data from the Korea Insurance Development Institute show that car accidents caused by drivers aged 65 or above are on the rise annually as the government is trying to keep aged drivers off the road. There were about 214,000 such cases in 2016, 234,000 in 2017 and 272,000 last year, making that age group the second-most dangerous drivers after those in their 20s, who spend more time on the road.

Starting this year, Koreans aged 75 or above have to renew their driver’s license every three years, down from the previous five, pass an aptitude test as well as receive a two hour-long course on safe driving.