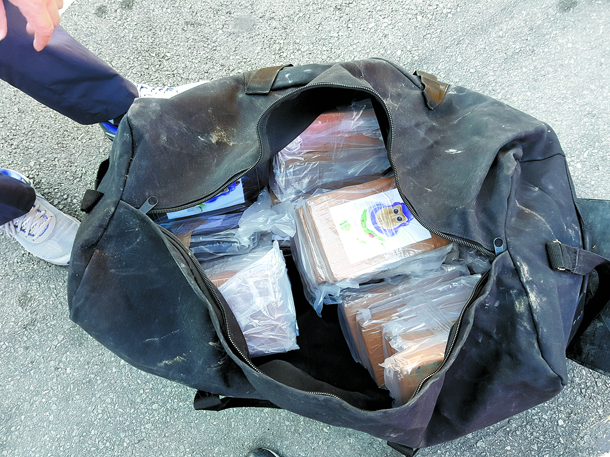 One of two bags containing 63.88 kilograms (140.8 pounds) of cocaine that was smuggled into the Port of Busan in a container in December 2018. The cargo was heading to China. [NEWS1]

A massive amount of cocaine was discovered inside a bag at the Port of Busan in December 2018, one of several massive drug cases that police say are representative of Korea’s growing narcotics problem.

According to customs officials, 63.88 kilograms (140.8 pounds) of cocaine was smuggled into the port, the largest amount of drugs found since the opening of Busan Harbor. Authorities estimated that the market value of the drugs was about 190 billion won ($160.4 million). The cargo left Mexico 20 days before it arrived in Busan on Dec. 14 and was heading to Tianjin, China.

The police and the National Intelligence Service, South Korea’s spy agency, conducted a drug raid on a studio apartment in Seodaemun District, western Seoul, in August 2018. Police confiscated 90 kilograms of methamphetamine in the apartment. 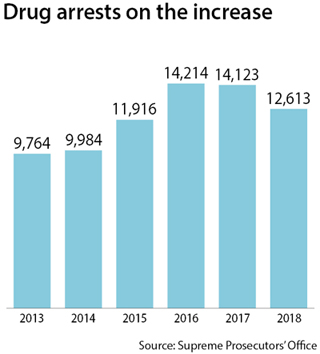 The drugs were brought in from Thailand and were heading to Japan, but some of them were also distributed in Korea. Police said that there was originally 112 kilograms of meth in the apartment at one time.

Korea’s reputation as a country that is largely free of narcotics is long gone.

According to drug enforcement authorities, Korea has become a stop in the international illegal drug trade. Police suspect that drug dealers consider Korea as an easy place to ship their illicit cargo through. Korea’s reputation as a country that is largely free of narcotics seems to be the problem. In 2018, 176 kilograms of narcotics were seized by authorities.

A portion of the illegal drugs smuggled into Korea are being passed on to drug dealers in the country.

“Because a large part of the illegal drug distribution is in the shadows, it is difficult to give a precise estimate of the amount of drugs distributed in Korea,” said Lee Ju-man, the section chief of the narcotics investigation unit of the National Police Agency. “Because drug organizations are constructed in a network, members do not know each other, making it difficult to trace the main body of the group even if we arrest a drug user.”

Police are conducting a crackdown on illegal drugs following the scandal surrounding Burning Sun, a club in Gangnam District, southern Seoul, that was a hotbed of prostitution and drug use. According to police, 1,677 people were arrested for illegal drug use or distribution and 585 were booked for drugs over the two months since Feb. 25.

Celebrities such as singer Park Yu-chun, naturalized television personality Robert Holley and Hwang Ha-na, a granddaughter of the late founder of Namyang Dairy Products, were among those caught.

“We need to acknowledge that [Korea] has come to a stage where it has surpassed being a stop [for narcotics distribution] and has become a narcotics-consuming country,” said Soung Jea-hyen, the team leader of the International Cooperation Center at the Korean Institute of Criminology. “Instead of focusing simply on arrest numbers, we need to inform people of the harmful effects of narcotics and create a plan to decrease demand for them in the long term.”