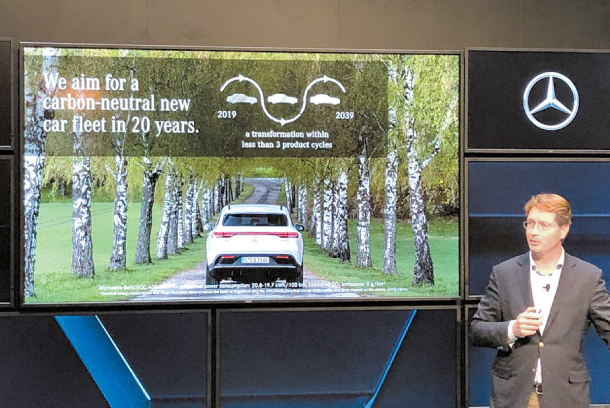 On the way to achieving that long-term goal, Kallenius promised to have all-electric cars and plug-in hybrids make up more than half of Daimler-owned Mercedes’s passenger car sales by 2030.

The timeline the automaker proposed is considered aggressive compared to past announcements by rivals, including Volkswagen Group, which announced in March it will make its fleet fully carbon neutral by 2050.

While Kallenius, the Swedish manager who will take over from Dieter Zetsche as chairman of Daimler’s board next week, said the company’s focus is on battery-electric and plug-in hybrids for now, he opened up the possibility of other solutions like fuel cells in the future.

“We have been working on fuel cell technology for 20 years, so we have a lot of know-how and a lot of [intellectual property] in this area,” he told the Korea JoongAng Daily on the sidelines of a press event held Monday in Oslo. “In terms of scaling zero-emission vehicles, first we are going for the battery electric vehicles but are continuing to develop the fuel cell. We will put [fuel-cell] in commercial vehicles first but can then be backwards compatible into passenger cars in the future if the market turns in that direction.”

While production costs for fuel cells vehicles are considered expensive, Mercedes said, “Today, no one knows for sure which drivetrain mix will best serve our customers’ needs 20 years from now,” in a statement. “That’s why we encourage policymakers to pave the way for tech neutrality: Let’s fix the target, but not the means to achieve it.”

Kallenius also shared ideas on how to make the whole auto production cycle carbon-neutral, including using renewable energy like wind power for all of its European plants by 2022, recycling raw materials and also driving its suppliers and partners to comply with the carbon-neutrality approach it is pushing.

“Our goal is to establish CO2 targets as one key criteria in making supplier decisions and contracts across all major commodities,” the German carmaker said.

Kallenius called on support from policymakers and governments around the world through funding and building infrastructure to minimize carbon footprints, pointing to Norway as one example of a country where government support has led to a huge increase in electric car adoption.

The progressive tax system in Norway makes most electric cars cheaper to buy compared to similar petrol models and emissions are a key criteria in calculating purchase tax. Among other incentives offered by the Norwegian government are access to bus lanes and discounted parking fees for electric car drivers.

“It’s one of the best, if not the best, connected market in the world with the best telecoms coverage and one of the leaders also going in toward 5G, so all the connected services around the vehicle works perfectly in Korea,” he said. “It’s been a very important growth market for us over several years now.”

While the unveiling of Ambition2039 was timed with the launch of the EQC, the first all-electric SUV under Mercedes, Kallenius said he is “cautiously optimistic” about the sales prospects of the car in the Korean market.

“The response that we have received once we showed the vehicle for the first time looks optimistic,” he said.

The SUV was launched on May 6 in European markets including Germany, but is expected to roll out in the latter half of the year in Korea.