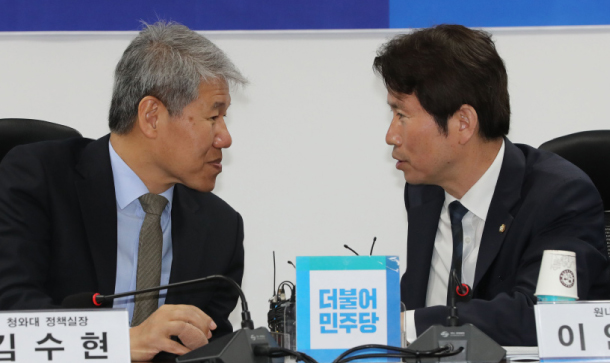 KWON HYUK-JOO
The author is an editorial writer at the JoongAng Ilbo.

Former U.S. President George W. Bush doesn’t have a polished speaking style. It was the microphone that publicized his language. Without realizing that the mic was on, Bush told British Prime Minister Tony Blair at the Group of Eight summit, “The irony is, what they really need to do is to get Syria to get Hezbollah to stop doing this shit and it’s over.” He was also caught saying “asshole” to a reporter who criticized him.

Former U.S. President Bill Clinton was in hot water for attacking Jesse Jackson when he was a candidate. When Clinton heard that Jackson supported his rival, he was caught on an open microphone. “A dirty, double-crossing, backstabbing thing to do,” Clinton said. Soccer star Maradona was also caught telling Pelé at an event in 2016 that Messi “doesn’t have the personality to be a leader.”

In Korea, then-National Assembly Speaker Chung Sye-gyun was involved in an open-mic controversy in 2016. When the ruling and opposition parties clashed over the dismissal of a minister, a microphone caught Chung mumbling: “Either an extension of the investigations of the Sewol Ferry incident or a hearing on far-rightist Parents Association should be offered. It cannot be free.” That was interpreted as an attempt to make a political deal to exchange either an investigation extension or a hearing on the civic group with the dismissal of the minister.

Recently, the ruling Democratic Party floor leader Lee In-young and Blue House policy chief Kim Soo-hyun were caught in a controversy because of a mic. It was heard that they were complaining about bureaucrats. I wonder if it was intentional. Thanks to the mic, I could see that they were not to be blamed for the failures of the government’s economic policy. The microphone works like a charm.