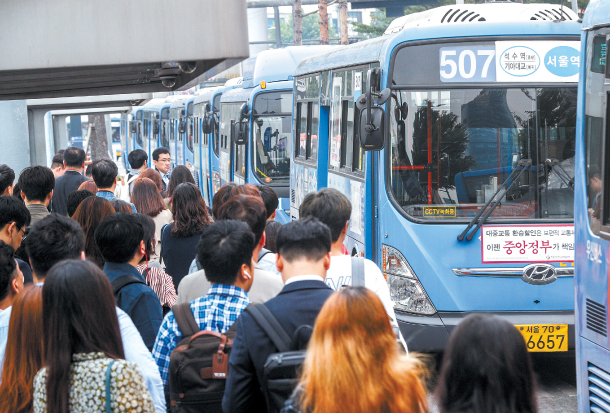 Commuters wait in line at a bus station in Jung District, central Seoul, on Wednesday after the labor union of bus companies and management managed to reach an agreement earlier that morning. [YONHAP]

Just an hour and a half before Seoul’s bus drivers were about to go on strike, an agreement on wage hikes and other issues was reached, preventing commuting chaos.

At 2:30 a.m. Wednesday morning, Seoul’s bus companies agreed to raise the wages of bus drivers 3.6 percent while extending the retirement age from 61 to 63. The companies also agreed on expanding welfare programs, including paying the costs of employees’ children’s tuitions.

Seoul’s bus drivers were demanding a near 6 percent wage increase.

If the companies and its drivers had failed to reach an agreement, all 7,405 buses in Seoul covering 354 routes would have been grounded, and commuter hell would have begun.

Seoul wasn’t the only city where the strikes ended before they even began.

Daegu was the first to announce a settlement Monday evening and other cities followed including Incheon and South Chungcheong. The last to join was Ulsan, which reached an agreement at almost 8: 30 Wednesday morning.

While bus drivers in Gyeonggi failed to reach a final agreement with their companies, they agreed not to go on strike while extending the deadline for negotiation to May 29.

Minister of Land, Infrastructure and Transport Kim Hyun-mee welcomed the news that bus drivers were back behind the wheel Wednesday.

“It is truly fortunate that the buses, which are responsible for the commutes of busy office workers and students, have not been grounded,” said Kim.

She stressed the importance of the 52-hour workweek, which was the main reason bus drivers threatened to strike.

“Because of long working hours, every year more than 100 people have died from [bus] accidents,” Kim said. “The adoption of the 52-hour workweek is an issue that goes beyond balancing life and work to directly connect to the safety of bus drivers and the public.”

Bus drivers demanded that companies raise their wages as shorter working hours will inevitably slash their paychecks. The companies said their labor costs were rising because they will be forced to make additional hires to adhere to the 52-hour workweek regulations.

The bus companies asked the government for financial support.

The central government refused direct financing and passed the buck to local governments, encouraging them to raise bus fares.

With less than 24 hours before the strike, the central government agreed to provide some support including assuming jurisdiction of buses traveling between cities, which will allow its direct support.

Gyeonggi was the first to agree to raise bus fares 200 won ($0.17) for intracity buses and 400 won for passengers on “red buses” that travel between Seoul and cities in Gyeonggi.

Those bus fares are expected to be raised in September. Other areas also planning to raise bus fares include Sejong and South Chungcheong.

“Our bus fares are relatively lower than that of advanced economies - only one-fourth of fares in Britain and one-third of fares in America,” Minister Kim said. “And in the case of the greater Seoul area, they have been frozen for the last four years.”

However, there are growing concerns about public funds being used as a result of the agreements.

The Liberty Korea Party criticized the government for using public funds to resolve the bus situation.

“The government and the ruling party have laid out measures raising fares and supporting companies through taxes,” said the conservative opposition party’s spokesman Min Kyung-wook. “Every time the Moon Jae-in government makes a mistake, why does it try to pay for it with people’s taxes?”

This year, the Seoul city government is planning to spend 291.5 billion won, but that is likely to grow significantly considering the 52-hour workweek.

While private entities run the companies, the governments subsidize them and get involved in such decisions as deciding bus routes.

The transportation minister said the government will try to improve efficiency in management.

“We will design the system thoroughly so that under strict government management, we will be able to secure the public interest [of buses] while increasing the financial management efficiency [of bus companies],” Kim said.

She added that the public should support any effort to improve public safety.

“We have to break away from a society that is at risk from overwork, and in such a process some inconveniences may arise,” Kim said.