The 63-year-old Kim, who briefly held the No. 2 post at the Ministry of Justice in 2013, is accused of receiving sexual favors and bribes worth 130 million won ($108,800) between 2006 and 2008, including money and valuables worth 30 million won from a construction contractor named Yoon Jung-cheon. 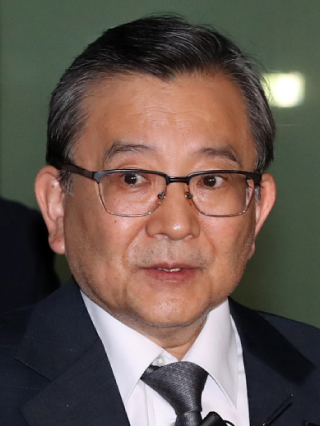 The Seoul Central District Court said it issued an arrest warrant for Kim because the evidence is strong enough to arrest him and he may attempt to destroy evidence and flee.

Earlier, a special investigation team set up under the Ministry of Justice requested a court warrant to detain Kim prior to his trial on charges of taking bribes.

The investigation team alleged that Kim received 5 million won from Yoon after being promoted to a senior prosecutor in 2007. The contractor also handed over an additional 20 million won in cash to Kim on various occasions, in addition to a western painting valued at 10 million won in early 2008, it said.

Kim is also suspected of pressuring Yoon to give up a debt of 100 million won from a woman surnamed Lee, who allegedly offered sexual services to the former prosecutor between 2006 and 2008. Notably, Kim was investigated by the prosecution in 2014 on rape charges filed by Lee but was acquitted later.

The team applied third-party bribery charges to the 100 million won because the money was not directly paid to Kim.

It also said Kim received bribes in the form of sexual favors, as Yoon insisted he had hired at least six prostitutes for the former official.

In addition, Kim is accused of accepting 30 million won from another businessman, identified only as Choi, between 2007 and 2011.

During recent questioning by the team’s prosecutors, Kim denied his acquaintance with Yoon, while admitting he knows Choi.

In 2013 and 2014, Kim was probed by the prosecution and police over various suspicions but was cleared of all charges due to lack of evidence. Prosecutors resumed the probe in March following an instruction from President Moon Jae-in.

Kim’s sex scandal became publicly known after a video clip was leaked showing a group of men, including one believed to be Kim, having a sex party with about 30 women in a remote villa owned by Yoon. Kim has denied the allegations.