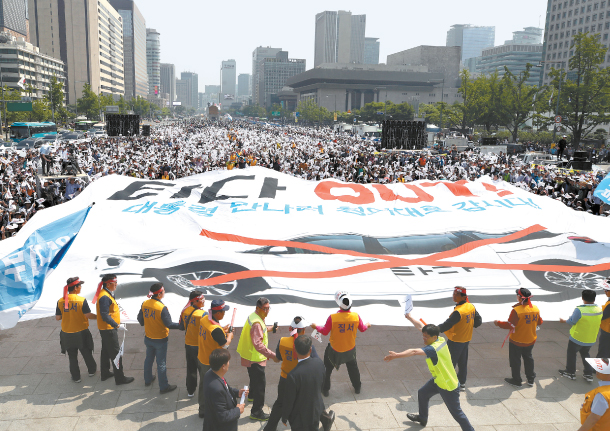 Korea’s start-ups are criticizing the government for not more actively mediating between them and established taxi companies, saying that the failure to get involved has slowed growth and innovation.

The Korea Startup Forum, representing some 850 start-ups in the country including Woowa Brothers, which operates delivery app Baedal Minjok, and car-sharing app Socar, noted that the government has failed to come up with real measures even after forming a discussion body to guide the parties towards an equitable arrangement.

“Local mobility start-ups have been looking for ways to cooperate with the taxi industry, but if some associations continue to spread falsehoods and create anxiety, mobility innovation will never come in this country,” the start-up organization said in a statement. “The government keeping silent on the matter is the same as negating the body it charged with mediation. If discussions for mobility innovation are overrun by falsehoods, both the taxi and mobility industries will go into decline. We need the state to step in to organize more constructive discussions.”

Animosity between mobility services and the taxi industry peaked again recently when a taxi driver in his 70s burned himself to death in protest of Tada, which offers ride-hailing services in 7- to 11-seat passenger vans.

The driver had displayed “Tada Out” banners on his car. That same day, around 10,000 taxi drivers of the Seoul Private Taxi Association staged a protest in Gwanghwamun, central Seoul, holding up “Tada Out” banners instead of “carpool out.”

Tada is a target because it is the only ride-hailing service with a thriving business.

Korea’s mobility services are basically divided into two categories: car sharing, which lends cars to users, and car hailing, which provides both the car and drivers. Korea’s Socar and Green Car and Zipcar in the United States fall into car-sharing service, which allows users to borrow the car owned by the company, similar to the rent-a-car business. Car hailing offers driving as a service. Uber, Poolus, Kakao Carpool and Tada are among the players. The field that conflicts with the taxi industry is the car-hailing service.

Previous attempts to establish car hailing services in Korea were mostly unsuccessful. In 2013, Uber closed down its local version of Uber X, a car sharing service that operates in around 600 cities worldwide. At Poolus, two-thirds of its staff resigned after the Seoul Metropolitan Government questioned whether operating services during the daytime contravened a law that restricts ride sharing to commuting.

Kakao Mobility tested a carpool service last year but halted this year due to fierce opposition from taxi drivers.

“The series of taxi driver’s suicides - in December 2018, and January and February this year - is blocking the establishment of carpool services,” said an official from the car sharing industry.

Including last week’s case, there have been three suicides and one suicide attempt.

Despite the strong opposition of taxi drivers to Tada, the service remains popular and is the only lucrative car hailing service. This success is why the taxi industry is now targeting the eight-month-old service.

It received investment of 110 billion won ($92.1 million) of funding after two financing rounds and recently increased the number of operating vehicles to 1,000.

It’s so popular that it’s hard to hail a Tada ride during peak times due to high demand.

Tada’s business is considered legal because of a clause in Korea’s transportation law that rental cars with a capacity of 11 to 15 seats are allowed to be legally leased with a driver. Unlike other services, Tada received determinations from the Transportation Ministry and the Seoul Metropolitan Government that its service is within legal bounds.

Socar CEO Lee Jae-woong expressed condolences about the death of the taxi driver in a Facebook post Friday, but he also added that Tada’s revenue is equivalent to merely two percent of entire revenues earned by Seoul taxis, implying the business is not big enough to really threaten the livelihoods of taxi drivers. Socar is the parent company of VCNC, the operator of Tada.

“The taxi industry is targeting Tada to block new technology from emerging and gain the upper hand in negotiating with the government,” said an official from the car-sharing industry who asked for anonymity.

ICT experts and mobility service providers are concerned that only the radical opposition is being heard and that constructive discussion is lacking.

After joint discussions fell apart after nearly two months of talks, Korea’s four nationwide taxi associations, Kakao Mobility, the Democratic Party of Korea and the Ministry of Land, Infrastructure and Transport formed a discussion body in late January that aimed to achieve an agreement on mobility services.

In March, the body suggested three measures: Kakao’s carpool service would operate at designated times; corporate taxi drivers would be given monthly wages; and the taxi industry and Kakao would work together to come up with a new mobility service that involves both parties.

However, the Seoul Private Taxi Association maintained the agreement only benefits taxi drivers who work under a company. It opposed the plan.

As such, no agreement was reached and the discussions have stalled.