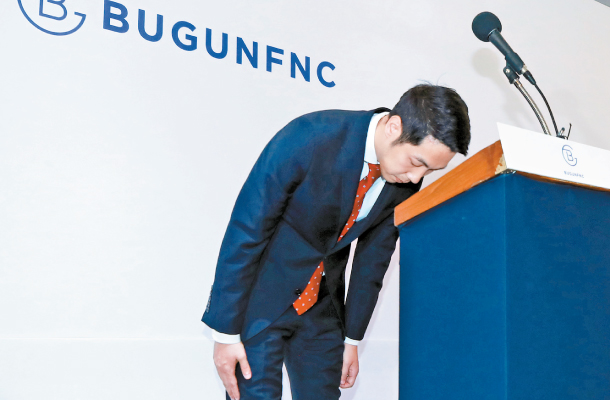 Im Ji-hyun’s Imvely website became a case study in online retail success. In less than a decade, the business she started on her own grew from selling wholesale apparel from Dongdaemun’s fashion market in central Seoul to introducing a cosmetics line of its own.

One of the earliest Instagram celebrities in Korea, Im herself was the biggest selling point. Her account was followed by more than 820,000 people. She modeled a lot of the clothes sold on the website.

Following a PR nightmare related to product safety and inappropriate responses, Bugun FNC, Imvely’s parent company, announced that Im will resign from management. She will only keep her role as the brand’s “influencer.”

Before, Im was a senior executive at Bugun and Imvely’s creative director, participating in product development and marketing.

“We sincerely apologize for the confusion, inconvenience and concerns we caused to our customers,” said Park Jun-sung, Bugun FNC CEO and Im’s husband, at a press conference held in Guro District, western Seoul, on Monday.

“As a start-up that rapidly grew in a short period of time, we acknowledge that we were not competent enough to satisfy our customers.”

This was the first large-scale press event held after Imvely was embroiled in controversy in early April, when pumpkin juice sold on the website was reported by a customer to be moldy. The company’s first response was that it would exchange the product in question rather than offer a refund.

From there, the mob took over, accusing the company of all manner of sin. Anti-Imvely accounts on Instagram claimed that the company copied designs and that it had sold other faulty products.

In response, Imvely cleared its products off the shelves of duty-free stores and retailer Olive Young.

Bugun said Monday that test data conducted externally indicated that none of the 51 products tested were found to have faults and that the recall was more of an effort to console anxious customers.

The company refunded 2.2 billion won ($1.8 million) to customers who had purchased the pumpkin juice over the last year, even if they did not possess the product anymore.

Regardless of the results, Imvely will stop selling food products and return to its focus on fashion and beauty, Park said. Imvely Cosmetics, the subsidiary that is in charge of the beauty business, will be run by professional managers.

Even as he apologized, Bugun said Monday that the company will not tolerate individuals spreading misleading rumors about products and staff. Earlier this month, Imvely and Bugun filed a suit requesting the closing of an account that it claimed was spreading falsehoods.

“We have a responsibility to accept criticism from customers, but as CEO, I also have a duty to protect my staff,” said Park.

“Rumors that spread from several accounts have already caused actual damage, not only to our company but also to our suppliers.”