Embassy in Washington under microscope after big leak

Embassy in Washington under microscope after big leak

“The Foreign Ministry is in a serious crisis,” Korean Vice Foreign Minister Cho Sei-young said during his inaugural speech Friday morning, referring to the leak of the presidential phone call. Moon appointed Cho to the post on Thursday. 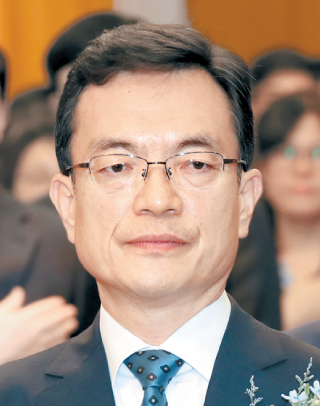 “Recently, we discovered slack discipline and criminal behavior that is unimaginable by a senior public servant who handles national secrets at a foreign mission,” said Cho. “It was a humiliating incident that betrayed the people’s expectations of the Foreign Ministry.”

“We must swiftly and sternly punish the person responsible and make sure that it will never recur,” Cho said. “We must restore public trust in the ministry as soon as possible.”

The government was greatly embarrassed after Rep. Khang Hyo-shang of the Liberty Korea Party (LKP) hosted a press conference on May 9 and made public a detailed description of a May 7 phone conversation between Moon and Trump.

A 54-year-old diplomat at the Korean Embassy in Washington, who went to the same high school as Khang, was identified as the leaker of the confidential information.

“You need expertise and professionalism in the Foreign Ministry,” Cho said. “Anyone who makes a clear mistake while creating a document or preparing for an event will face due punishment and demotion.”

The mood was heavy at the ministry in the aftermath of the leak. Phone conversations between state leaders are classified as Level 3 confidential records in Korea. More sensitive information is classified as Level 1 or Level 2 secrets. Level 1 secrets would pose a fatal threat to national security if exposed.

The Korean Embassy in Washington is currently undergoing an examination of its workings.

According to government sources, the examination has already revealed that other diplomats at the mission accessed the confidential records of the Moon-Trump phone conversation.

They said Moon and Trump had a 35-minute phone conversation on May 7, and the contents were shared with Korean Ambassador to the United States Cho Yoon-je. The ministry sent a diplomatic telegram labeled as a Level 3 classified record through an encrypted diplomatic communication system. The recipient was the ambassador in Washington.

The two leaders’ phone conversation took place at a sensitive time. North Korea resumed military provocations for the first time in many months by firing unidentified projectiles on May 4. Moon and Trump discussed that situation as well as other issues.

According to the sources, the investigation revealed that several officials at the embassy printed out the classified record, taking turns to read it. According to security protocol, a classified document must be stored in a special archive with double locks. Copies are strictly restricted, and all copies must be assigned serial numbers.

The Blue House said Thursday that the suspect may face criminal proceedings in addition to disciplinary action by the ministry. Under the criminal code, leaking a diplomatic secret is punishable by up to five years in prison.

Diplomatic sources, however, said it is unreasonable to keep diplomats at foreign missions from accessing confidential diplomatic telegrams. “The recipient was designated as the ambassador because he is in charge of the mission,” a diplomatic source said. “But that is very different from a letter marked, ‘For your eyes only.’

“It is a routine part of the job of a diplomat to receive, send and read diplomatic telegrams under regulations governing delegated authority,” he said.

Following the ministry’s investigation, the Korean Embassy in Washington will undergo another two-week audit starting next week by the Board of Audit and Inspection.

According to the embassy source, the suspected leaker was excluded from his official duties last week when the investigation began.

Ambassador Cho reportedly told diplomats at the mission not to be shaken by the incident and concentrate on their duties, including preparation for Trump’s planned visit to Korea in June.

Concerns, however, grew that the U.S. government is avoiding contact with Korean diplomats.

“Key counterparts of the White House and State Department are avoiding talking to Korean diplomats,” a source close to both Seoul and Washington told the JoongAng Ilbo on Thursday.

“Because Korea announced the leak of the conversation between Moon and Trump, the Korean Embassy in the United States has become a partner that can no longer be trusted.”

Another official agreed. “Of course there were many instances in the United States in which national secrets were leaked to media,” said another official. “But the government rarely admits it. Because when you admit it, you cannot be a part of the exchange of international information.”