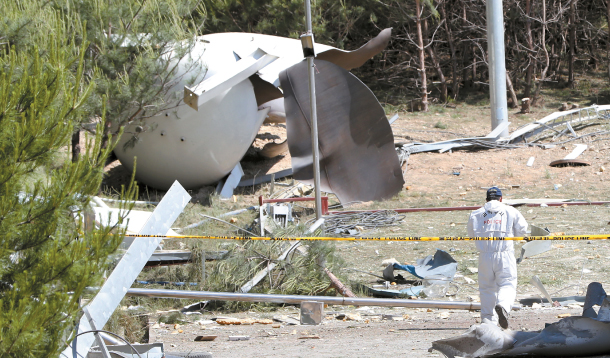 A hydrogen storage tank exploded in an industrial complex in the eastern city of Gangneung Thursday, killing two people and injuring six. Authorities are investigating why.

The explosion took place at Gangwon Technopark in Gangneung, Gangwon, at around 6:22 p.m. Thursday. The explosion shattered the windows and walls of the park’s two structures for manufacturing. The park has five buildings in total.

It killed two businessmen visiting the factory on a field trip, including a 37-year-old man surnamed Kwon.

It injured six others, including a 43-year-old surnamed Kim, a 42-year-old surnamed Lee and a 44-year-old surnamed Yoon, also on the field trip, and a 27-year-old female researcher of one of the companies located in the complex. Only Kim was said to have sustained a serious injury and he is being treated at a hospital in the vicinity.

Gangwon Technopark was established in 2007 and is home to some 40 companies including ceramic manufacturers, semiconductor parts producers and research institutes.

“We will need to determine the exact cause of the tank explosion,” said Sung Yun-mo, minister of trade, industry and energy, while visiting the complex on Friday. “Once we know the cause, we will have to make sure that the accident is not repeated.”

The hydrogen tank that exploded was being used by a renewable energy company to conduct experiments generating electricity from hydrogen fuel cells. It was one of three hydrogen tanks at the complex.

“This project for electricity generation from hydrogen was a three-year project supported by the Ministry of Trade, Industry and Energy,” said Cho Hyung-hwan, a director of Gangwon Technopark.

“This year was the last year of the project. It followed all the rules laid out in the High-Pressure Gas Safety Control Act.”

Authorities said they will be questioning the company that managed the three hydrogen tanks at the complex.

“A hydrogen tank can explode if the pressure inside the tank spikes beyond what it can handle,” an energy expert told the JoongAng Ilbo on the condition of anonymity.

“But when the pressure inside a tank begins to spike, a pressure relief valve should have worked to release the gas. Authorities will need to check if the valve worked properly.”

Employees of companies at the complex have been requesting entrance to their own premises to check the state of their equipment and products. Authorities said they will be able to enter the site once the buildings are deemed safe.

“We will inspect the state of the damage sustained by companies at the complex as well,” said Jang Si-taek, deputy mayor of Gangneung, at a press conference in the city on Friday. “Please be assured we will take necessary measures regarding any damage.”

“But I want to reassure the public that research institutes throughout the country producing, storing and researching hydrogen are being regulated and managed in compliance with international standards.”