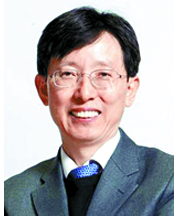 Addressing the recent rise in conflict in domestic public transportation such as the opposition from taxi drivers against ride-sharing services, the transport expert said that despite the rocky road ahead, social consensus is necessary for the inevitable industry shift during an interview with the Korea JoongAng Daily on May 22 at the International Transport Forum (ITF) in Leipzig.

“Ultimately, there will be losers and winners [with the introduction of new mobility] and the problem of social conflict has to be addressed,” said the transport expert.

“In Korea, the taxi industry is underpaid,” explained Oh, who heads the government-run research agency. “Preventing the socially and economically disadvantaged from further exclusion from society and coming into some agreement or establishing a social safety net is an important condition for success.”

“Without such conditions, the rash implementation of a winner-takes-all situation could lead to even more problems such as social polarization,” added Oh, referring to the series of extreme measures that taxi drivers have taken in protest against the introduction of new mobility services.

While Korea has seen companies such as Kakao Mobility attempt to introduce ride-sharing and carpooling services, they have largely been met with heavy opposition from the taxi industry that is concerned about losing customers.

Some taxi drivers have even resorted to suicide by setting themselves on fire.

Emphasizing that the industry’s direction toward new services is inevitable, the transport industry veteran said working toward that change matters.

“The movement for shared mobility is a definite direction that we are headed in,” explained Oh. “It’s an undeniable trend that will bring benefits to global society.”

According to the ITF, an inter-governmental think tank under the OECD, shared mobility will account for over one-fifth of all urban journeys globally in 2050, a huge increase from less than 2 percent in 2015.

The explosive growth means that there are pitfalls to consider and that discussions need to be had to reduce the damage through compromise, said Oh, citing the dialogue body between the taxi and new mobility industries that the government created at the start of the year.

“This issue isn’t just confined to Korea but is a global problem,” said Oh. “Nevertheless, the conversation needs to continue to reach a social compromise.”

While the dialogue body reached an agreement in March to create a new taxi platform business, protests against new mobility services from taxi drivers have continued.

“To earn the trust of the public, [new mobility services] should start operations in rural areas or late at night when taxis are difficult to find,” suggested Oh. “Rural areas are ideal as they have sparse public transportation and an aging population.”

“There has always been a problem in such areas that there won’t be enough demand if public transport is introduced and would struggle financially - shared mobility can solve all this.”

Regarding the recent conflict surrounding bus driver wages, Oh said only transparency will maintain trust from the public.

“The quasi-public transport system has been called into question […] subsidies will only continue to increase and if the government seeks to raise fares, financial transparency is key,” said Oh.

The government facilitated a deal with bus drivers and companies earlier this month to raise wages to prevent a nationwide strike as a newly introduced maximum work-hour cap led to reduced wages for drivers. The government drew criticism, however, as the deal led to a rise in fares and more government support to some companies.

The KOTI president said safety and quality are key in looking at the future of the transport business, arguing that the local industry has passed the stage of simply meeting demand through quantity and speed.

“Rather than the efficiency-based and quantity-based focus of the past […] a system of cooperation and social compromise is needed,” explained Oh, highlighting that the disputes in both the taxi and bus industries are rooted in a broader social call for safety and quality.

“The work-hour cap is directly related to safety […] through the transitional phase, there needs to be compromise and a societal understanding,” Oh said.

Oh also added that along with the sharing economy, automation and electrification will lead to a broader industry overhaul.

According to a survey by KOTI, which focuses on both technology and policy research, 50 percent of respondents expressed a willingness to use driverless taxis or shuttle services.