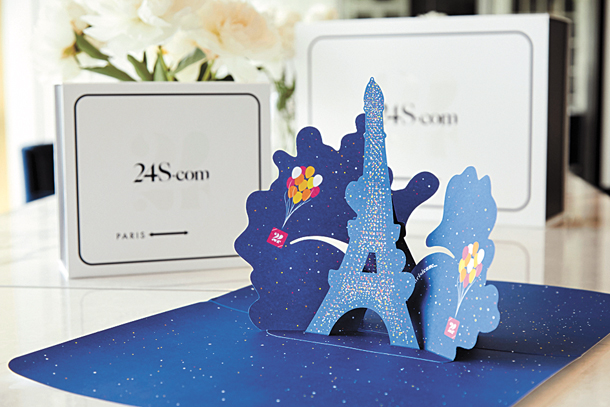 A pop-up of French monuments like the Eiffel Tower is included in 24S.com’s parcels. [24S]

Korean is only the fourth language after English, French and German to be offered on the online site, which stocks over 200 haute couture brands, including Louis Vuitton, Gucci and Dior. Concentrating on the Korean market seemed like the natural thing to do given the high demand for luxury goods in the country, explained CEO Eric Goguey during a press briefing in Seoul last Thursday.

“Just going on the streets and looking at the fashionable young ladies, it was obvious that there was a real appetite for fashion business,” said Goguey. “And we already had organic sales coming from Korea even without translating the experience.

“Customers are also amazingly trained to purchase fashion pieces online,” he added, a nod to Korea’s vibrant e-commerce industry. Goguey hinted that 24S.com will add popular local payment methods like Kakao Pay to its payment options in the future.

Technical reasons were also at play behind choosing to focus on Korea before China, Goguey admitted. China is considered one of the world’s largest luxury consumers, with a recent McKinsey report forecasting that China will account for 40 percent of the world’s luxury spending by 2025

“We need longer time to have a good strategy to deliver to China,” he said.

Customers can now get customer care service in Korean and pay in Korean won as well. Free three-day express shipping service is available for all purchases over 250,000 won ($210).