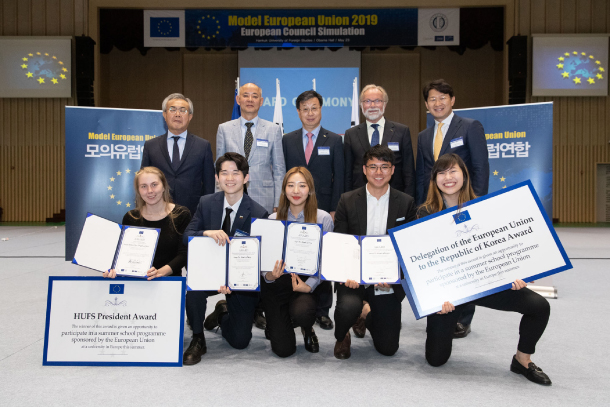 Student awardees of the Model European Union 2019, held on Thursday at Hankuk University of Foreign Studies (HUFS) in eastern Seoul, pose with European Union (EU) Ambassador to Korea Michael Reiterer, second from right in second row, Kim Si-hong, professor of the HUFS Jean Monnet Centre of Excellence, far left in second row, and Park Sung-hoon, a Jean Monnet chair professor of the EU Jean Monnet Programme at Korea University, second from left in second row. The event was held to commemorate the 30th anniversary of the EU Jean Monnet Programme, an international initiative by the EU to encourage teaching and research on European integration studies at universities. [EU DELEGATION TO KOREA]