X-Men cast says goodbye to series in Seoul: ‘Dark Phoenix,’ which ends the epic saga, comes out in Korea on June 5

X-Men cast says goodbye to series in Seoul: ‘Dark Phoenix,’ which ends the epic saga, comes out in Korea on June 5 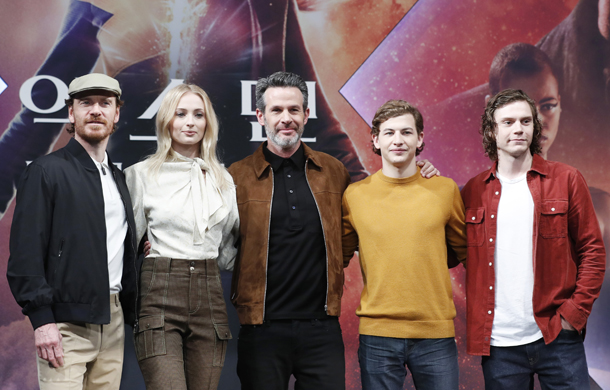 From left, actor Michael Fassbender, Sophie Turner, director Simon Kinberg, Tye Sherian and Evan Peters pose for the camera at a press conference to promote their latest and final X-Men series “X-Men: Dark Phoenix” on Monday in western Seoul. The film is slated to premiere on June 5. [NEWS1]

“X-Men: Dark Phoenix” is set to come out in local theaters on June 5, but before its official release, the cast of the film visited Korea to give a glimpse into the final chapter of the X-Men series on Monday.

“What makes X-Men so different from comics is [in the film] we portray characters aren’t just superheroes - they’re outcasts, outsiders and they’re rebels,” said the director. “So the audience can relate to them because they’re humans - flawed, fragile and broken in ways real people are.”

Fassbender and James McAvoy portray the charismatic main characters Magneto and Professor X, and they have both played their roles for eight years since “X-Men: First Class” (2011).

Although initially friends, the two become leaders with conflicting mindsets, and their complicated relationship is one of the central themes in the series. In the final chapter, the two will clash again regarding the fate of Jean Grey, an extremely powerful mutant with telepathic and telekinetic powers who turns into a Dark Phoenix after a rescue space mission goes wrong.

“I’m glad we finished with this Phoenix to explore Jean Grey’s character and her own centerpiece film,” said Fassbender. “It’s a fitting end to this journey.”

The Dark Phoenix is portrayed by Turner, who commented that it was an honor to be part of a legacy that has been loved by comic book fans for decades. “[I’m so amazed that] I get to be that person,” she said. “Simon put a lot of trust in me to play Jean Grey and her fans put their trust in me and I’m just really, really honored [that I could play this role].”

The actor also said that she studied cases of dissociative identity disorder and schizophrenia to change from a timid mutant without knowing the full potential of her powers to the confident, cool phoenix who becomes a threat to the existence of X-Men and ultimately the earth.

“[I had to] really kind of feel the confusion of disorientation, frustration and anger that drives you to tears,” she said. “[Studying the disorders] really helped me to get into the character, and I wouldn’t have been able to find her without studying that.”

During the press conference, the cast seemed to have a sense of solidarity and camaraderie even in off-screen moments, which seemed to have inspired Kinberg to direct the final episode of the franchise after being dedicated to the previous series as both a scriptwriter and producer.

When asked about whether he had any future plans to continue the series with the Disney company, the director replied that he had not thought of this when making the film.

“I just want to honor and focus on this family we’ve built - a family of actors and characters and do them justice, telling the most ultimate and iconic X-Men story as the completion of this cycle [of the story],” Kinberg said.

Fassbender also shared his recollections of “X-Men: First Class” (2011) with the press, who said that although the journey has been a privilege for him, he will always remember the first audition he had for the first film, which he said gave him some very special memories. “James was there to audition with me, and he was just so generous and so supportive,” the actor said. “I felt an immediate connection with him and we had good chemistry [from the start].”

To wrap up the conference, Kinberg spoke on behalf of all the people behind X-Men for the Korean fans who have loved the film series from the very beginning. “If you’ve seen one of these movies or all the movies, this is a movie that is a combination of saying goodbye and thank you. Thank you for being part of this family as long as you have.”