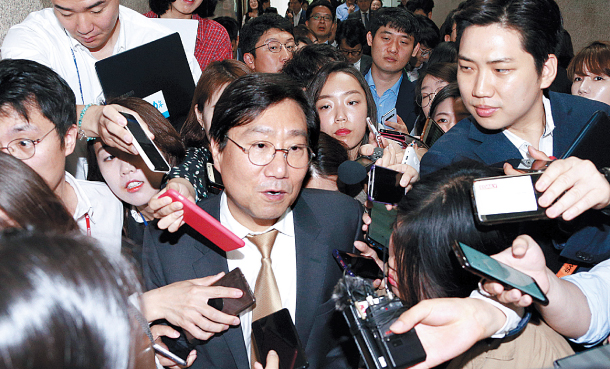 Reporters rain questions on Yang Jeong-cheol, director of the Institute for Democracy, a think tank of the ruling Democratic Party, on Monday after an internet media outlet reported that Yang had a dinner with Suh Hoon, director of the National Intelligence Service, for about four hours at a restaurant in southern Seoul on May 21. [YONHAP]

A four-hour dinner between the chief of the nation’s intelligence agency and the director of the ruling party’s think tank stirred political controversy on Monday, as opposition parties questioned the political neutrality of the National Intelligence Service (NIS).

The Fact, an internet media outlet, reported Monday that Yang Jeong-cheol, director of the Institute for Democracy, and Suh Hoon, director of the NIS, met for about four hours at a restaurant in southern Seoul on May 21.

The report included photos and a video footage of them bidding farewell after the meeting, which started at 6:20 p.m. and ended around 10:45 p.m.

Yang is close to President Moon Jae-in. He ended a two-year self-imposed political exile on May 14 to head the think tank of the ruling Democratic Party (DP).

On his first day on the job, Yang made clear that his primary mission is the DP’s victory in next year’s general election. Suh was named as head of the NIS by Moon shortly after he took office in May 2017.

The report described how Yang’s political influence is growing. On May 16, he met with National Assembly Speaker Moon Hee-sang. Five days later, he dined with Suh.

Following the report, Yang sent text messages to reporters and clarified that he did not meet exclusively with Suh. “It was a dinner of several friends who have known each other for a long time, not a one-on-one meeting,” he wrote.

Yang claimed no sensitive topics were discussed. He said he was invited to a meeting that Suh had already scheduled because he knew the participants.

He complained that The Fact had violated his privacy and questioned the report’s intentions. “I am not a senior public servant,” Yang said. “And I am not a subject of public interest. I have no idea why they followed me to pay attention to my life after work hours. I have doubts about the intention of the report.”

Suh did not publicly respond to the report.

The Blue House denied that the political neutrality of the NIS was violated. The Moon administration has pushed a drastic overhaul of the NIS by restructuring the organization to end its domestic operations, particularly attempts at political interference.

“It was reported as a ‘private’ meeting,” a senior presidential aide said Monday. “It was not confirmed what they discussed, and I don’t see a need for the Blue House to comment on the issue.”

Asked if any presidential aides had participated in the meeting, the official said, “I didn’t check.”

“If their meeting was related to the general election, it is a serious problem,” said LKP Chairman Hwang Kyo-ahn. “The NIS is banned from interfering in elections. It is also banned from involvement in matters outside its duty set by the law.”

Hwang, however, said he did not know the details of the talks between Yang and Suh, so he could not elaborate any further.

A LKP spokesman demanded Suh resign from his post.

“The NIS is not an informant to feed intelligence on general elections to the DP,” said Rep. Kim Jung-jae, a spokesman for the LKP. “Yang must stop his shady attempt to use the NIS for the election. Suh must immediately resign and go back to his original job of helping the DP with the election.”

Kim said the NIS’s neutrality and the people’s faith in the fairness of elections are already ruined.

“Our national security is facing a serious crisis after North Korea’s missile provocations,” said Kim. “At this critical moment, the NIS chief has forgotten his job and volunteered to help the ruling party with the general election. This administration only cares about the election.”

Another LKP spokeswoman issued a statement Monday vowing to lay bare the details of the conversation during the four-hour meeting.

The opposition Bareunmirae Party said the NIS has opened itself to suspicion of attempting to influence domestic politics.

“We need to hold a National Intelligence Committee hearing as soon as possible to lay bare the truth,” said Rep. Oh Shin-hwan, floor leader of the Bareunmirae Party.

The committee, which handles oversight of the NIS, is headed by Rep. Lee Hye-hoon of the LKP.

The Bareunmirae Party also issued a statement saying the Moon administration was repeating a mistake by its ousted predecessor.

“All NIS chiefs of the Park Geun-hye administration were punished for the dishonest appropriation of special operations funds and illegal political interventions,” it said. “The NIS must keep a distance from the politicians and it must avoid any misunderstanding.”