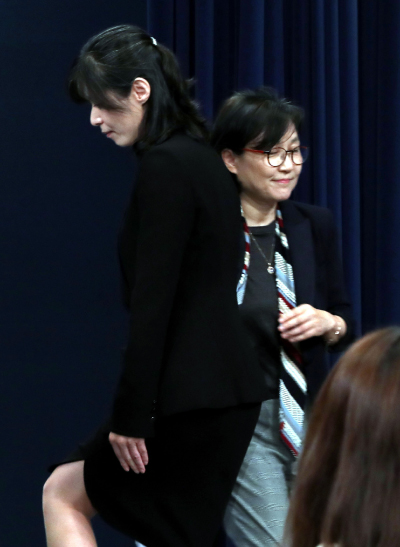 Kim Oe-sook, left, the newly-appointed senior presidential secretary for personnel affairs, ascends the podium at the press room of the Blue House on Tuesday while the outgoing secretary, Cho Hyun-ock, right, descends from the podium. [JOINT PRESS CORPS]

Kim Hyun-jun, head of the National Tax Service (NTS) Seoul Regional Office, has been promoted to the post of NTS commissioner.

The new secretary, a former lawyer, told reporters, “I know how important personnel affairs are and how heavy the responsibility is.”

She said she would do her best for “fair and reasonable” personnel management. The outgoing secretary, Cho Hyun-ock, admitted that there were “some appointments” of top government officials that did not meet public standards.

The Blue House is seeking to improve the screening and other personnel management procedures.