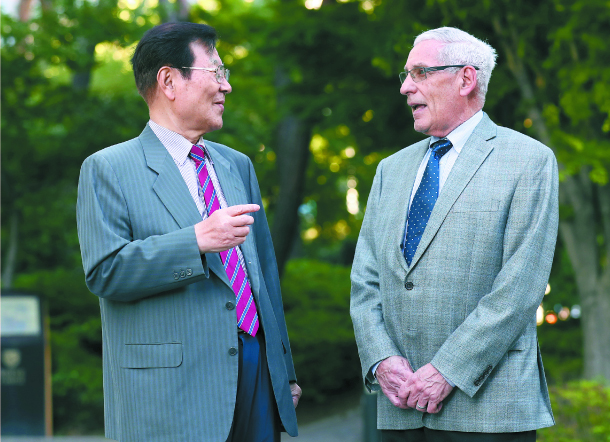 Neil Gilbert, a professor of social welfare at the University of California, Berkeley, right, talks with Cho Heung-seek, the president of the Korea Institute for Health and Social Affairs, at a hotel in Mapo District, western Seoul, on May 20. [CHOI SEUNG-SHIK]

Neil Gilbert, a world-renowned professor of social welfare at the University of California, Berkeley, thinks Korea’s recent minimum wage increase is a bad idea. He said that he would instead choose to expand the earned income tax credit (EITC).

“The EITC is like a minimum wage for people with low income,” said Gilbert. “Raising [the minimum wage] means that people who would have benefited from the EITC wouldn’t be able to receive money from the government. The EITC is a better way to raise low wage.”

The EITC is a grant given by the government in the form of a tax refund. Families with an annual income of 36 million won ($30,303) or less and less than 200 million won in assets can receive up to 3 million won a year. Around 1.4 million households in Korea were granted an average of 746,000 won in 2018.

Gilbert was invited by Cho Heung-seek, the president of the Korea Institute for Health and Social Affairs, to give a lecture on Korea’s welfare policy at the Korea Chamber of Commerce and Industry in Jung District, central Seoul, on May 21. Gilbert is familiar with Korea’s welfare system and has published a thesis on the subject, “Productive Welfare and the Market Economy: Korea’s Enabling State.”

Gilbert’s numerous publications include 32 books and over 140 articles that have appeared in The Wall Street Journal and leading academic journals. He also chairs the editorial board of the International Journal of Social Welfare. The JoongAng Ilbo sat down with Gilbert at a hotel in Mapo District, western Seoul, to talk about Korea’s welfare policy and its future. The following are edited excerpts of the interview.

Q. In the past two years, the government has raised the minimum wage by 30 percent. Many people were fired in the aftermath of the increase, and people are complaining to the government as people thought the policy would improve the situation. What do you think about Korea’s situation?

A. Raising the minimum wage is substituting the EITC and shifting the subsidy that would originally be given by the government to the employer. If this role is shifted to employers, maybe they can’t afford it. What is happening in the United States because of the minimum wage increase is that people are substituted with robots that make coffee.

Convenience store owners are struggling to pay rent and wages for their workers. Because of the increase on the minimum wage, they suffer every day.

A 20 percent increase on minimum wage is very high, especially for small businesses. Some people might say that capitalists are making too much profit. And for big companies, they could manage it even if they have to pay employees more. But for places with few employees, especially for restaurants, it is very hard to manage because restaurants have a thin margin of profit. We had this in San Francisco, and one way to surpass this problem was to pass it on to the consumer. Businesses would raise prices, but not all businesses could do that. If I was doing the policy and I wanted to raise incomes, I would choose the EITC. In the United States, there are two minimum wages. There is the government minimum, which is low, and every state has its own wage. California has a high minimum wage and Nevada’s is lower. You can’t set a minimum wage for the whole country. Some places will suffer. The market sets the wage, so the government can’t set the wage.

Korea is worried about wasting its budget. Resources are limited, so there are opinions saying that we should give money selectively to save money and improve effectiveness. Is this a good idea?

This is a longstanding issue and it is political. If you want the government to do everything for you, then you argue for universal welfare. If you believe in the market, then you’re more for selective welfare. In universal welfare, you have to take money from everybody. Then you give benefits to those who need it. Why take money from a poor person and give it back to them again? In universal welfare, the people who pay for it are taxpayers. It costs more money. I see no reason for that. At some point, if the taxes are so high and the government starts taking more money from people, people are going to want to work less. At some point, taxes reduce the incentive to work.

The Korean government is suggesting a progressive tax for income, property and corporations. People are worried that this policy will soon kill the economy. Pretty soon, when the government collects more money, the effects of the policy might disappear. Should we be worried?

I think that the Korean tax rate is relatively low compared to OECD countries, so there may be some room to increase taxes. However, economic growth is important. It is also important where the increased taxes are spent. Universal welfare, to me, is not the way to spend it, because it doesn’t get redistributed properly and you spend more than you have to. Focusing on people in need with a selective approach, which doesn’t mean that you can’t raise taxes, is the better option.

Korea is struggling with its low birthrate problem.

What causes the birthrate to be so low?

A lot of countries at the peak of their wealth are experiencing a drop in their birthrate, so the idea that everything is about money is maybe not true. It is more complicated and I think, culture, culture, I think is the better answer to the problem. In the United States, there was a show called “The Brady Bunch” about a husband and wife with 10 children.

In the 1990s, there was a show called “Sex and the City,” about three women. In the end of the show, the three women had two children in between them and the total fertility rate was less than 1.0. That is culture. People don’t have enough money to live the way we want to live, to go to vacations and live in a big house. Then the children are last on the list. It is a preference, a choice.

Korea has a 0.98 birthrate. This is a big problem in Korea.

I call it demographic suicide. Here is what you have to worry about. The dependency ratio is the proportion of the working-age population to people 65 or over. And the working-age population pays the benefits for pensions. By 2050, the ratio will become almost one, which means that one person will have to take care of a person 65 or over. That problem is so much greater than the question of tax. Unless the dependency ratio is turned around, welfare will be very difficult for the society to manage. In 2050, the average life expectancy of Koreans will be close to 90 years old. How will the country survive? Korea may have to bring people from other countries, younger people to survive in this situation. Culturally, this will be a hard thing to do, bringing people from different cultures and making them Korean.

How do we change culture?

I wrote a book about the United States, during a time when 20 percent of women were childless. The question is: Can social policy influence culture? I’m not sure about this. If you want a tax for long-term health insurance for the elderly, what they do in Germany is people who don’t have children pay more taxes. This is because people who have children are carrying their weight by having children, and their children contribute by paying taxes for other elderly. That is a kind of selective approach.

People might change their norm if they are endangered, and feel obligated to marry and have children. Wouldn’t this solve our problems?

What may happen is when very few children are born, there are more opportunities to have children. So that might also put that into the equation in people’s minds, but it is a serious problem. It will be hard for people to change their minds.