The South Korean government held an emergency meeting Friday on preventing an outbreak of African swine fever after North Korea confirmed its first case of the deadly pig disease at a farm near the Chinese border.

“North Korea has notified the OIE [World Organization for Animal Health] about the African swine fever outbreak,” said Vice Minister of Agriculture, Food and Rural Affairs Lee Jae-ouk at a meeting he hosted at the government complex in Sejong. “Although the North’s outbreak area is located at the Chinese border, we believe the risk of its spread to the South is high. We are taking the current situation gravely and will conduct additional disinfection and quarantine measures.” 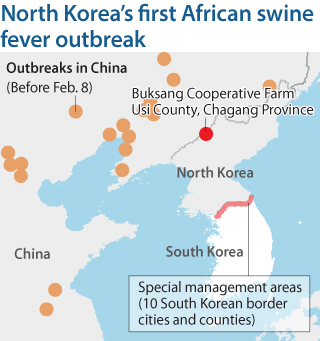 African swine fever is a severe viral disease affecting domestic and wild pigs. Because there is no cure or vaccine, the fatality rate is 100 percent. Outbreaks were reported in Africa and Europe in the past, but it has spread to China, Mongolia and Vietnam starting late last year and has had a devastating impact on China’s pork industry.

The North reported its outbreak to the OIE on Thursday. According to the summary information on the outbreak, the event started on May 23 at the Buksang cooperative farm in Chagang Province.

The report said the North’s labs confirmed the viral outbreak two days later and submitted a report to the OIE on Thursday as it was the first case of the disease in the country.

The report showed that the outbreak affected 99 pigs at the farm. The fatality rate was 100 percent, as 77 died due to the virus and the rest of the pigs were killed and disposed. The North said it took control measures, and as it is still ongoing, it promised to submit follow-up weekly reports.

The South Korean government implemented disinfection measures in 10 cities and counties at the border with the North on Friday.

All vehicles and people who are entering the South from two immigration offices at the inter-Korean border will undergo disinfection.

The Agriculture Ministry said it will cooperate with the Unification, Defense and Environment Ministries to prevent the disease from entering the South from the North.

On Friday, the North informed the public about the disease through state media, including the main daily Rodong Sinmun, without reporting about the outbreak in Chagang Province.

The reports said the disease is not fatal to people, but will cause serious economic damage.

North Korea experts said the reports were an indication of the country’s desperation.

Lacking disinfection and medical abilities, the North has relied on strict quarantine measures to prevent contagious diseases from entering the country. When Severe Acute Respiratory Syndrome (SARS) outbreaks were reported in neighboring countries in 2003, the reclusive state stopped all air and maritime travel.

The South’s Unification Ministry said Friday that it is ready to help the North. The two Koreas already signed an agreement in November last year to work together to prevent and treat contagious diseases.

“We will contact the North through the liaison office and create specific measures in cooperation with other South Korean ministries,” said Lee Eugene, the ministry’s deputy spokeswoman. “The South is ready to cooperate with the North to prevent the spread of the outbreak.”

If the North responds, inter-Korean communication, severed since the breakdown of the North-U.S. summit in Hanoi, Vietnam, in February, will automatically resume. However, it remains to be seen if Pyongyang will accept this offer.

“We have already told the North multiple times about our intention to help disinfection,” Lee said, without elaborating on its response.