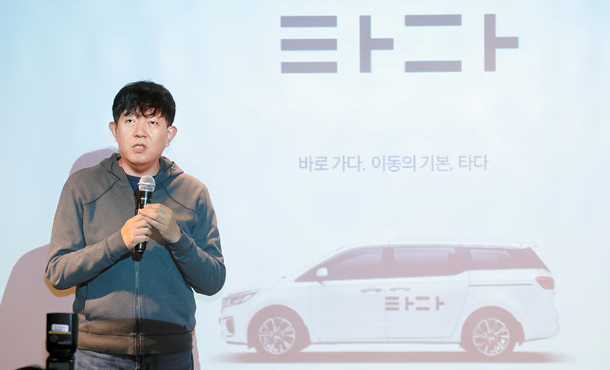 The taxi industry has declared war on another ride-hailing service.

Launched in October, Tada has shown rapid growth to become one of Korea’s most stable ride-offering services. The number of ride requests per month rocketed 1,300 percent between October and April, boosted by an overwhelmingly positive customer response - 89 percent of Tada customers had chosen to reuse the service.

But as its popularity increased, so did the number of complaints from the taxi industry, which claims the service is illegal. Last month, around 10,000 members of the Seoul Private Taxi Association (SPTA) staged a rally calling out the van-hailing service. On the same day, a 76-year-old taxi driver died after setting himself on fire in protest.

Here’s the basics on what Tada is, why it is so contentious and why the apparent truce between Kakao and the taxi industry has not helped the van-hailing service. 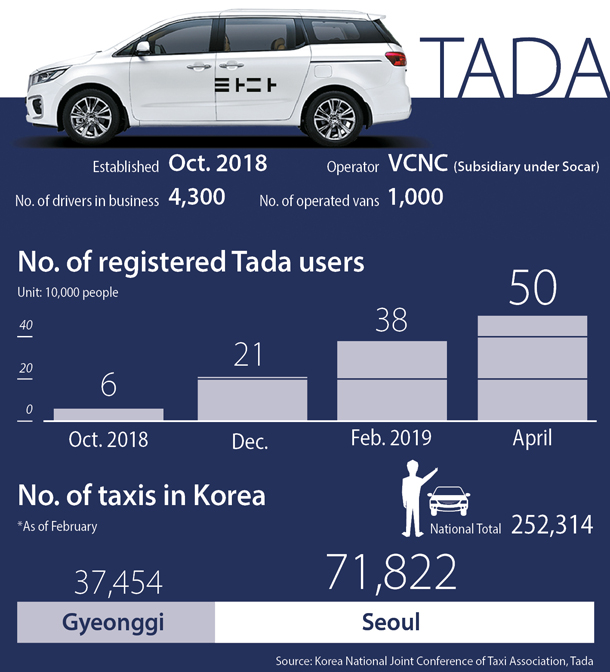 Tada is a service that offers a ride-hailing service in 11-passenger vans. It was launched in October last year by VCNC, the operator of Between, a messenger app for couples.

When a ride is requested through Tada’s app, drivers head to the pickup spot in minivans that are waiting in designated garages. After the ride, the drivers return back to the point of departure. Customers and drivers are automatically allocated to the closest van.

In the six months since the service launched, Tada’s popularity has rapidly grown through word-of-mouth recommendations due to the vehicles’ clean interior, quiet and polite drivers and a system that prevents customers being rejected regardless of how far they are traveling.

This is possible because drivers are paid a fixed salary based on a monthly wage or working hours, not by how far they travel. The app they use does not inform them of the customer’s destination before the journey gets underway. Fares fluctuate according to demand, but are roughly 20 percent higher than regular taxis.

Q. Why are taxi drivers protesting against Tada?

Taxi drivers claim that Tada is threatening their livelihood by going against a domestic transportation law that forbids rented vehicles from offering rides in exchange for money. Tada, on the other hand, remains firm that its business is within legal boundaries, based on a written exception that specifically allows rented vans - or at least vans with 11 to 15 seats - to be offered with drivers.

The local taxi industry argues this is an arbitrary application of the rule irrelevant to the loophole’s original purpose, which was to promote tourism.

“Tada runs 11-passenger vans, but their main clients are women or single passengers that have zero association to the tourism industry,” the SPTA said in a statement.

But private taxi licenses are expensive because the government no longer issues new ones to regulate supply. As they’re traded among drivers, prices depend on market demand. For elderly private taxi drivers who are thinking of retirement, the amount they get from selling their license is considered practically their severance pay.

When the carpool controversy reached its peak with Kakao last year, taxi license prices fell to around 64 million won ($53,730) in mid-May from nearly 90 million won in January 2018 due to low demand, according to Seoul Taxi Land, a website that offers market prices for taxi licenses.

Q. But if Tada is so illegal, surely it would have been shut down by now?

Well that’s the problem - it isn’t.

According to the law, Tada’s business abides by the exception allowing rented 11- to 15-seater vans to offer drivers as a paid service.

Its operator VCNC says that the service was approved by the Ministry of Transportation as falling within those legal boundaries during discussions between officials and company executives. Two inquiries to the Seoul Metropolitan government also received positive responses.

Nods from these two institutions are meaningful considering that they both have past experience raising questions on carpool or car-sharing apps’ legality.

This tacit approval from both the state and city government sets Tada apart from the other services that the taxi industry has rallied against. Poolus and Kakao Mobility, for example, tried to offer carpooling based on a clause that said commercial use of privately-owned vehicles is allowed during commuting purposes. But the lack of a clear, written definition of “commuting hours” eventually left little room for the companies to find sound legal grounds to offer their services upon.

Q. Isn’t the government getting involved?

The Transportation Ministry has declined media requests to comment on Tada’s legality after the protests began. The ministry says it can’t comment because the issue is undergoing investigation. Until the prosecution rules on the SPTA complaint, we probably won’t know the government’s opinion.

Q. O.K., so that’s Tada, the taxi drivers and the government. Who else is involved?

That’s pretty much it in terms of direct stakeholders, but what fueled the public’s interest even more was a high-profile war of words between government officials and Tada supporters in the start-up industry. Socar CEO Lee Jae-woong, in particular, has been active in voicing his support for Tada through his Facebook page.

On May 22, Financial Services Commission (FSC) Chairman Choi Jong-ku accused Socar CEO Lee Jae-woong of being “rude and selfish,” saying Lee needed to show more respect to taxi drivers whose jobs were being affected by emerging businesses and the sharing economy.

The comment was a reaction to Lee’s Facebook post a few days before that said “Death should not be used to push agendas or be politicized in the interests of someone” after a taxi driver in his 70s immolated himself in opposition to Tada. Lee added that the taxi industry should base their arguments on facts and on an analysis of why the taxi market was failing rather than create false rumors to aggravate anxiety.

On the same day Choi made his comment, Lee fired back on his Facebook account once again saying, “What’s the point of him saying so out of thin air? Is he intending to run in the general election?” People in the start-up industry backed Lee, raising questions on why Choi should comment on a topic outside his field of authority.

The two eventually made peace when the FSC chair softened his tone the next day, saying that he just wanted to point out the need for balance between innovation and inclusiveness. Lee agreed in another Facebook post, saying that traditional industries need help, which “the government should actively step in and innovative industries should take part in.”

Earlier on in February, Lee also fired back at Economy and Finance Minister Hong Nam-ki’s comment that the sharing economy cannot be realized without considering the opposition of traditional industries. In a Facebook post, he questioned why the agreement for such services should come from stakeholders and not from society as a whole.

Q. Didn’t we already go through this last year?

Yes. Last December, Korea’s four main taxi associations staged a massive rally to protest against Kakao Mobility’s carpool service. In fact, Korea has always been a hostile market for peer-to-peer ride-hailing start-ups since UberX closed down domestic operations in 2015 after the Transport Ministry declared it illegal.

The background to this hostility has always been the huge lobbying power of the taxi drivers and the industry associations that represent them. The industry has proven to be a political powerhouse and few politicians have proven willing to go up against the taxi drivers for fear of losing their power at future elections.

Taxi associations have always been against peer-to-peer mobility services, but the conflict with Kakao last year was certainly the biggest yet. Since the IT company launched a beta version of its carpool app in early December, three taxi drivers have set themselves on fire in protest, with two dying. A major rally in December saw roughly one-fifth of all taxi drivers in Korea gather, according to police estimates.

After numerous failed attempts to bring the two sides to the discussion table, Kakao surrendered by “temporarily” shutting down the beta service of its carpool app in mid-January. A few days later, the four taxi associations agreed to take part in a joint discussion body with Kakao Mobility, the ruling Democratic Party and Transport Ministry officials.

Q. I thought an agreement was reached and there was some sort of detente now?

There was, but only with Kakao Mobility, and it isn’t exactly perfect.

In March, the joint discussion body announced their first agreement composed of three key points: Kakao’s carpool service would be allowed to operate during weekdays between 7 a.m. to 9 a.m. and 6 p.m. to 8 p.m.; corporate taxi drivers would receive fixed salaries and the two parties would together create what they called a “platform taxi.”

But in order to realize this, there was a pile of regulatory reforms to be done. The agreement itself also needed further discussions to determine the details - how much were corporate taxi drivers going to be paid? Which local taxi laws was the government going to ease to allow “platform taxis?”

Despite the tentative agreement, government officials and the ruling party have been slow in making progress on the legal side, say Kakao and the four taxi associations. Bizarrely, this delay has actually managed to briefly unite Kakao and the taxi associations - in mid-May, they publicly criticized the government and the Democratic Party for “neglecting” their role to make change. They argued that after the establishment of the joint body, there hadn’t been much progress on the law reforms or detailed discussions on how to implement the proposals.

But the real issue as far as Tada is concerned is that the joint discussion body is only dealing with the issue of Kakao’s carpool service. The agreement regarding carpool operating hours solely applies to Kakao. In fact, some smaller local mobility start-ups have publicly opposed the plan, saying their opinions were not considered at all. So Kakao and the taxis may have made an uneasy peace, but this comes as little consolation to Tada.

Q. So what happens next?

First and foremost, the controversy over Tada’s legality is unlikely to end before the prosecutor’s investigation comes out. Technically, it’s possible for the Transport Ministry to give an authoritative interpretation that Tada is within legal boundaries - the opinion Tada says the ministry already had before it became controversial - but at the moment, it is declining to take a definite stance before prosecutors do so.

On the Kakao Mobility and taxi associations’ issue, progress depends on how fast the government and the Democratic Party move, but regardless of how it is resolved, Tada will probably not benefit.