In 1997, Daiso opened as a small store in Cheonho-dong, eastern Seoul. In the two decades since, the variety shop has transformed into a giant retailer operating at more than a thousand locations nationwide.

Although it borrowed its name from the Japanese brand, in Korea it is a local company operated by Asung Group. The Japanese company is reported in the Korean press to have a shareholding in the Korean company, but that could not be confirmed.

In recent years, a number of brands similar to Daiso have surfaced in Korea. As part of the effort to lead a new retail trend, Shinsegae Group launched Pierrot Shopping, a Korean take on Japan’s Don Quijote, last year. Low-cost retailers Miniso, cofounded by Chinese and Japanese designers, and Denmark-based Flying Tiger Copenhagen opened their first stores in Korea in 2016.

Daiso’s affordable products, all of which range between 500 won and 5,000 won in price, have been major contributors to the company’s success amid slow economic growth since the 2008 global financial crisis.

But the monthly supply of 600 new items and the neatly organized displays are also attracting customers to drop by the stores for a guilt-free shopping experience.

Daiso has continued to grow almost non-stop over the past several years, bucking the trend in retail. With intense competition and weak consumption, most companies in the sector are struggling to maintain growth.

Even the rising presence of online shopping platforms, like Coupang, has failed to hurt Daiso.

Although Daiso has obstacles to overcome, like a challenging regulatory environment and accusations of mistreatment of workers, the company will likely continue to grow in coming years, without a single comparable rival, according to Seo Yong-gu, a professor teaching business at Sookmyung Women’s University.

The 2008 financial crisis has played a major role in shifting attention to Daiso from posh retailers.

According Euromonitor, the variety store market size in Korea skyrocketed from $590.3 million in 2008 to $2.2 billion in 2018. Daiso has a 70 percent market share in the segment.

“Polarization of consumption has accelerated since the 2008 global financial crisis, which led to an increasing number of households shopping at Daiso,” said analyst Park Jong-ryul at Hyundai Motor Securities. “The company has met the needs of consumers in the economy where household spending has structurally stagnated.”

But apart from the tendency for people to go thrifty, government regulations against giant retailers also helped Daiso expand.

Starting in 2012, government regulations forced giant retailers, like discount chains, to close twice a month and limit their operations between 12 a.m. and 8 a.m. This affected the businesses of some Homeplus and Lotte Mart branches, which were operating 24-hours-a-day back then.

Opening new branches has become difficult, requiring cooperation of local small merchant associations to obtain approvals. Since the regulation went into effect, it now takes a discount chain around three years to open a new branch.

The number of Emart and Homeplus branches in Korea hasn’t changed much over the past five years. Emart branches inched down slightly from 147 in 2016 to 142 currently, while Homeplus stores remained largely unchanged, going from 142 in 2016 to 140 now.

“Daiso’s capacity to provide a wide range of affordable products, of course, played a crucial role for its rapid growth,” said a source from the industry. “But it can’t be denied that Daiso enjoyed benefit from the government regulations against major retailers.”

With the new stores, accessibility improved. This, in turn, created a virtuous cycle raising Daiso’s standing as a complementary shopping location where people can easily drop by, according to Prof. Lim Chae-un who teaches marketing at Sogang University.

Daiso deals in more than 30,000 products. It has been a popular location to shop for daily supplies, such as paper towels, beauty items and stationery. But those ordinary products aside, Daiso has become a retailer where hip items are born.

Last month, it introduced Marvel goods following the release of “Avengers: Endgame.” Marvel goods are known for their high prices. A single palm-sized figurine can easily cost more than 50,000 won. But the most expensive Marvel item at Daiso is 5,000 won. A stainless tumbler featuring Captain America’s shield is one of them.

A mini washing machine, priced at 3,000 won, is an example of a Daiso product that has caught on big. Just like a regular washing machine, the pink toy runs as a washer when water is poured in.

It was originally designed for kids, but it turned out to be useful for adults, with some using it to wash dirty cosmetics brushes and others mixing soju and beer to create the so-called somaek drink. Backed by posts from YouTubers and bloggers who introduce the latest trends, the toy went viral and became very hard to get. It was sold for up to 15,000 won on a Naver Cafe that deals in second-hand goods.

Daiso provides seasonal items and presents for special days, like Children’s Day. For this summer, for instance, Daiso introduced great quantities of yellow and blue items, like dishes and lunch boxes. Daiso regularly provides advice on how several of its items can be mixed and matched, and on its blog and Instagram shows how its products can be used for specific occasions.

Offering such diverse items at a cheap price is possible because Daiso sets the price before finalizing how products will be made. If a manufacturer doesn’t accept the price offered by Daiso, the company tries to lower the price by playing with the specs. It may simplify packaging and designs or change the materials used in manufacturing. Daiso also offers to pay in cash and purchase in large quantities, thus gaining leverage in the market.

Daiso is aided in the search for diverse items by its Asung HMP affiliate, a company that develops household items. With more than 3,000 global partners, Asung HMP supplies goods to Daiso in Korea and Japan. Daiso also has a connection to Asung, which designs products and packaging, as an affiliate.

Catering to the changing Koreans

Creating a pleasant shopping environment is an important factor in Daiso’s growth, as the number of single-person households increases.

Discount marts and supermarkets sell goods at affordable prices, but consumers usually have to purchase in bulk to enjoy the discount. Daiso sells items individually.

“Korean consumers have a strong tendency to demand both sensibility and affordable prices from their shopping experiences,” said Prof. Lim. “This is because they’re very accustomed to shopping at department stores while, at the same time, have become very used to cheap prices from the overheated competition among discount marts.”

Despite the affordable prices, Asung Group Chairman and CEO Park Jung-boo says the key to Daiso’s success has been the “product value, not the cheap prices.”

A spokesperson for the firm similarly said, “Quality can’t be much of an issue at Daiso because manufacturers don’t intentionally change their manufacturing process for the goods to be sold at Daiso.”

But Daiso, just like some other retailers, hasn’t been free from consumer complaints for poor product quality.

Videos and online posts that warn viewers about some of the products sold at Daiso can easily be found on blogs and on YouTube. Kitchen knives, masking tape and footrests for bikes are some of the offending items that have been highlighted by the critics.

Despite the popularity, Daiso faces regulations that have been proposed by lawmakers to protect small local businesses.

With Daiso’s sales skyrocketing out of line with the trend, some have expressed the need for it to be subject to the Distribution Industry Development Act, which discount chains must follow.

The ruling Democratic Party is pushing to revise the bill on retail industry development, arguing firms with semi-large stores, like Daiso, are hurting smaller local businesses. Rep. Seo Hyung-soo from the ruling party proposed a bill late last year to evaluate sales or total assets instead of just store size.

Some agree with the need for Daiso to be subject to the regulations, saying Daiso’s exponential growth was partly supported by the government’s regulations against major retailers.

“Daiso started off as a small retailer, and placing it under regulation due to its improved sales is a violation of the principle of the free market,” said Prof. Park Jeong-eun, who teaches business at Ewha Women’s University. “Regulations to protect consumers are necessary, but regulations that bar the free competition aren’t right from the consumer perspective.” 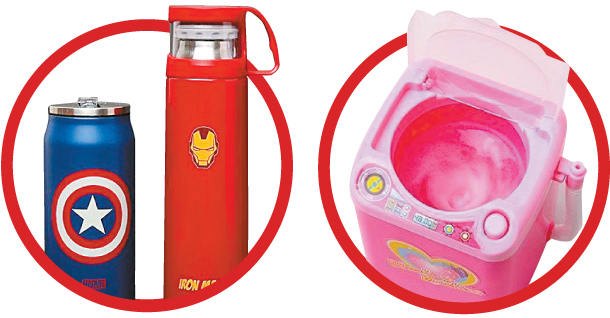 Daiso needs to be regulated to a certain extent, like limiting the sale of specific items at branches adjacent to smaller stores that sell overlapping goods, according to Prof. Seo.

Industry insiders forecast the retail regulations that are increasingly unfavorable toward Daiso could limit its further expansion.

As much as Daiso earns profit by achieving economies of scale, it is crucial for the company to lower its production cost and improve product sourcing.

To do so, Daiso needs to open more branches to gain negotiating power, since more Daiso stores gives manufacturers a larger channel for the selling of its products.

The public image of Daiso has taken a hit in terms of the treatment of workers.

The company is known for the hiring of women on career breaks struggling to find work. According to the spokesman, those women - usually housewives aged 30 to 50 - “know how to neatly display goods and are able to categorize matching goods.”

Yet Daiso continues to face struggles over the mistreatment of its workers and unpaid work hours even after the 2017 a crisis that revealed Daiso’s so-called slavery contract.

In 2017, Daiso was found to have forced its workers to sign the contracts. The contracts demanded absolute obedience to senior colleagues and required an immediate dismissal if they were found to have instigated a protest or rally without the approval of the firm.

But even after the incident, complaints from workers continued to spread online, mostly revolving around low payment for excessive amounts of work. A number of people took the issue to the Blue House petition website.

A post written by a Daiso worker last August reads, “Daiso says it will operate the store up to 11 p.m. because sales dipped due to the heat wave. From a different perspective, will it give bonuses to workers if its sales go up? No, because that’s the least likely thing Daiso would do.” More than a thousand people agreed with the post.

“Daiso had been preoccupied with the external growth,” until the point when the slavery contracts went public, said a spokesperson for the company. “But we believe the public backlash has functioned as a stepping stone for us and helped us strengthen our external growth.”