Kim chews out factory apparatchiks over their work ethic

Kim chews out factory apparatchiks over their work ethic 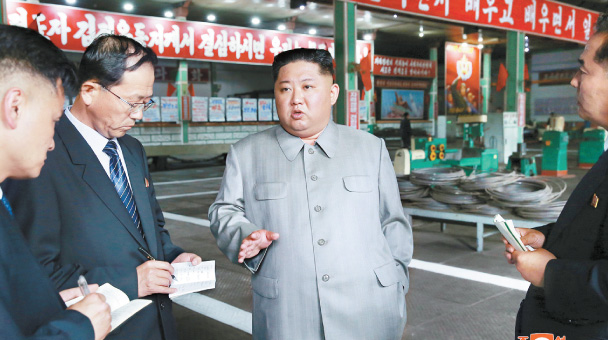 North Korean leader Kim Jong-un berated provincial officials over their work ethic on a tour of provincial factories and schools on Saturday, his first public appearance since supervising short-range missile tests on May 9.

In a visit to a machine plant in Kanggye, Chagang Province, Kim raised his voice to dress down officials for what he called a “wrong” attitude toward work, citing in particular the ramshackle state of factories that, he said, appeared to be designed only for show, according to a report on Saturday by the state-run Korea Central News Agency (KCNA).

The next day, the KCNA reported on Kim’s visit to another machinery factory in South Pyongan Province, the last in a tour to seven different sites in two days - five of which were factories producing military equipment and machines.

Kim ordered that the factory be turned “into a modern plant with completed mechanics of production, home-grown production system and cutting-edge science and technology, and thus put it on an advanced level of the world,” the English-language report read. State media coverage of the visits struck a tone in line with the country’s recent emphasis on self-reliance, dialed up since the failure of the second summit between Kim Jong-un and U.S. President Donald Trump in Hanoi, Vietnam, last February.

Kim’s public appearances since then have been few and far between. His personal supervision of weapons tests on May 4 and 9 - during which Pyongyang is believed to have fired at least one short-range ballistic missile - suggested the regime was threatening to renege on its self-imposed moratorium on nuclear tests if Washington and Seoul didn’t get more serious about denuclearization talks.

Kim’s public trips over the weekend came days after the Chosun Ilbo reported that five senior Foreign Ministry officials in Pyongyang - including North Korea’s special representative for U.S. affair, Kim Hyok-chol - had been allegedly executed at an undisclosed time for their roles in the failed summit with Trump.

Kim Yong-chol, the former head of the North’s United Front Department (UFD) and alleged architect of the engagement drive with Washington, was sent to a concentration camp in Chagang Province, according to the South’s Chosun Ilbo.

Even Kim Jong-un’s own younger sister, Kim Yo-jong, was apparently ordered to lower her public profile as a consequence of the country’s diplomacy flaming out in Hanoi. As first deputy director of the ruling Workers’ Party, she attracted great attention from the international media as she accompanied her older brother to his multiple meetings with South Korean President Moon Jae-in and Trump.

Kim Yo-jong was noticeably absent from Kim Jong-un’s field trips over the weekend. Accompanying the leader instead were figures like Hyon Song-wol, the leader of the North’s Samjiyon Orchestra, who was elected to the party’s Central Committee in April, when a major reshuffle saw more than half of the regime’s official decision makers in the Politburo replaced.

Hyon has been a representative figure of North Korea’s cultural policies under Kim Jong-un, and she led coordinated cultural exchanges with the South last year. She was also the subject of rumors published by the South’s Chosun Ilbo in 2013, when the outlet reported she had been executed along with various other performers for selling and participating in pornographic videos. Given this history of misreporting from the Chosun Ilbo, The Washington Post on Friday cast doubt on the outlet’s most recent report on Kim Hyok-chol’s execution, citing a number of U.S. officials and diplomats who expressed caution and even skepticism about the story.