Italy is not just about ruins, museums, things of the past

Italy is not just about ruins, museums, things of the past 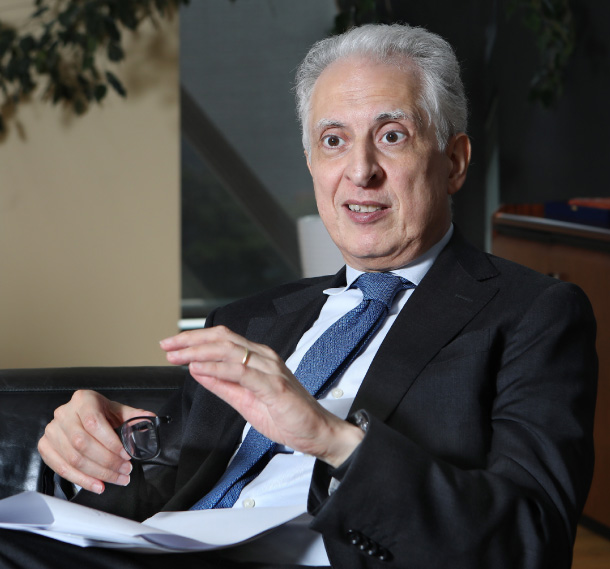 The National Day of Italy, commemorated today, is a day to remember a break from the past, says Federico Failla, ambassador of Italy to Korea.

“It was the second of June in 1946 when Italians passed a referendum deciding on the future of Italy,” said Failla. “The referendum was about choosing between a monarchy and a republic and the people chose a republic. Most felt at the time a need to have a clear break with the past.”

Italy celebrates the day every year with a parade in Rome. Italians and Koreans will be celebrating the day at Failla’s diplomatic residence in central Seoul, as has been the tradition of the mission for years.

Remembering the day that marked a new beginning for the country, the diplomatic mission of Italy in Korea is also hoping to begin a new chapter in their relations.

“In Korea you see many Italian brands that are popular and restaurants offering Italian cuisine,” Failla said. “In terms of cars, of course people know Ferrari, Lamborghini and Maserati and so on. But what we feel is that there is another part of Italy that is less known, and that is science and technology.”

Italy has had six Nobel laureates in the fields of physics and chemistry, including Enrico Fermi, and six more in the field of medicine, including Mario Capecchi.

With a background in renewable energy, as former coordinator for energy issues at the Directorate General for Globalization of Italy’s Ministry of Foreign Affairs and International Cooperation, Failla said he also hopes to contribute to the development of renewable energy in Korea, whose current administration’s plan is to phase out of nuclear power and expand reliance on the renewables.

Q. The National Day of Italy marked the end of monarchy and beginning of a republic in the country. How do the Italians commemorate this day today?

A. It was the second of June in 1946 when Italians passed a referendum deciding on the future of Italy. The referendum was about choosing between a monarchy and a republic and the people chose a republic. Most felt at the time a need to have a clear break with the past. As you know, we participated in World War II on the side of Germany and Japan. Italy felt it needed a new democratic start.

On this day, a military parade is held in Rome — but it is not a celebration of the country’s military strength. Italy, in its Constitution, says that it rejects war as an instrument of offense against other people’s freedom and as a means of solving international disputes.

The referendum held on June 2, 1946, also marked a departure from Italy’s history with fascism. How do Italians, in general, assess this part of the country’s history?

The end of fascism in Italy dates back to 1943. The Constitution of Italy is based on the principle of democracy, of rejecting old ideologies of a totalitarian regime and fascist regime. Of course the Italians have reflected on the lessons learned during this period of a fascist regime, especially to prevent it from happening again.

We have laws forbidding perpetrating messages of hatred and violence in Italy. The large majority of Italians condemn that period and continue to remember the atrocities that happened to prevent them from taking place again.

How do you assess some of the current ultra nationalistic sentiments around the world that some experts describe as a return of fascism?

Fascism has been a tragedy for mankind and the word should not be used lightly. While we have always to be on the alert to avoid fascism, I don’t see a danger of a return to fascism, at least in democratic countries at the moment.

Advancements in science and technology are not necessarily the first image that Koreans have about Italy.

In Korea, you see many Italian brands that are popular and restaurants offering Italian cuisine that are popular. In terms of cars, of course people know Ferrari, Lamborghini and Maserati and so on. But what we feel is that there is another part of Italy that is less known and that is science and technology. You see, even in the fashion industry there is science and technology behind it — for instance, we are always researching how to best design with traditional materials like wool and cotton.

When it comes to pharmaceuticals, Italy is the biggest manufacturer in the European Union. And when it comes to the biomedical research, Italy’s finesse is among the top five in the world. Italy was also one of the first country in the world to put a satellite into space after the Soviet Union and the United States, in 1964.

Has Italy’s experience in preserving cultural heritage been applied at any sites in Korea?

In April, we held a bilateral symposium on disaster prevention for cultural heritage preservation using advanced ICT technology at the Electronics and Telecommunications Research Institute in Daejeon.

Back in Italy, a national restoration institution has tested hanji [traditional Korean paper] to see whether it can be suitable for restoring ancient books. The results have been positive, we heard, in some cases. We are going to hold a symposium with Korea on the topic before the end of the year.

Earthquake and prevention of natural disaster is also another field of cooperation between Italy and Korea. Unfortunately, Italy is much more often hit by earthquakes than Korea is. We have had exchanges of experience between scientists on natural disasters between the two countries and we are also cooperating on satellite monitoring technology.

Italy phased out nuclear power by deciding to close all nuclear power plants in 1987, a plan that Korea’s current government has. Has there been any bilateral cooperation in this sector?

The people of Italy decided to give up nuclear power plants in the middle of the 1980s. Since then, we stopped building nuclear power plants and started to dismantle existing ones. So today we have no energy produced by nuclear plants. This doesn’t mean that we have given up nuclear research, however. Italy is a leader in nuclear medicine, for nuclear decommissioning and nuclear safety. Very often, cooperation with our companies is sought out internationally in this specific sector. Today, one-fourth of the energy in Italy is produced through renewable sources, including solar and wind, and this is one area in which we are working closely with Korea.

What other areas of bilateral cooperation are you hoping to expand during your tenure?

There are two aspects. Of course, increasing economic cooperation is one. We see that relations with Korea are going very well. Korea absorbs the most Italian exports per capita among countries in Asia.

But another sector that the mission of Italy in Korea plans to focus on is the cultural sector. We’d like to bring more Italian culture to Korea, especially contemporary culture. Sometimes I have a feeling that people around the world think that Italy is all about museums and ruins, and things of the past. But we want to show that we are still alive, still producing culture in many areas.

Where can locals in Korea experience more contemporary art and culture from Italy?

This year, we had a screening of the Italian film “Piranhas” at the Jeonju International Film Festival. We also had the Italian Design Week in March, which is held every year in Korea, in addition to Italian Food Week. At the Food Week event, we explain the reasons for the choice of ingredients and their health benefits. Another event I would recommend is an exhibition about lighting by Italian artists at Jongno that is open until the end of June.

Lastly, Korea had its first experience with an influx of refugees last year. Do you have any recommendations for how to cope with refugees?

Italy has had experience with this in the Mediterranean for years and cannot face the emergency alone. One measure would be global investments in sectors like health, education and especially energy in some of these countries where people are leaving. There are one billion people in the world without access to energy and that is one of the main reasons for their escape.

But the issue is never black and white. Some Italians are ready to accept a higher number of refugees, while others are concerned about their ability to integrate. I find both concerns legitimate. The best way is to always give people the chance to voice their opinions and vote on the issue.