Come in from the cold

Come in from the cold 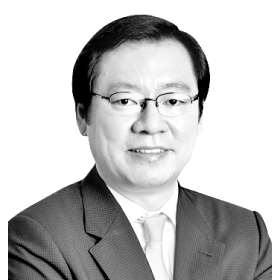 Chang Je-kuk
The author is the president of Dongseo University.

After a snowstorm arrives, we can do nothing but sit tight in our rooms with all the windows and doors closed. Yet those in charge of the rooms are telling people there is nothing to worry about. They are even yelling not to open the doors or venture outside. They are reluctant to find effective ways to cope with the cold, as they have to consider others who resist such ways. In the meantime, the cold air seeps in and people begin to shudder.

The United States and China have been competing to rally support for their crusade. The two are in a tense war over supremacy, not just in military and security but also in technologies and markets in the fourth industrial revolution. Japan has made it clear what team it is on. The closer Washington and Tokyo grow, the smaller the room for Seoul to squeeze in becomes. Washington is bound to back Tokyo on issues between the two allies. 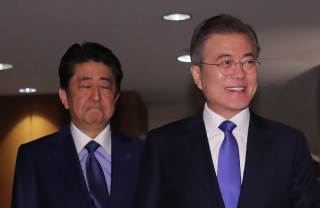 President Moon Jae-in and Japanese Prime Minister Shinzo Abe head to a meeting room at the Parker New York Hotel for a summit on the sidelines of the United Nations General Assembly in New York on Sept. 26 last year. [YONHAP]

In the meantime, Seoul’s strategic value is waning. Washington has demanded Seoul permanently install an antimissile system, join its sanctions on Chinese network equipment and smartphone maker Huawei and back U.S. freedom-of-navigation patrols in the South China Sea, testing Seoul’s loyalty. South Korea is being pressured to choose between China and the United States and Japan.

But Seoul’s hands are tied on affairs with Tokyo because of the standoff over the Korean Supreme Court rulings on Japanese companies to compensate for forced labor during the colonial period. For national interests, Seoul must first reach out to mend fences with Tokyo. It must first show efforts to address the forced labor issue. It proposed it would seek advice from experts last year, but has not made any progress in coming up with solutions. There is a limit in the executive branch of the government, as it cannot interfere with the highest court rulings under the separation of power principle. Still, it must find a solution to change the mood by the time the president flies to Osaka, Japan, later this month for the Group of 20 summit.

The government sometimes needs to take action that could upset the general public for broader and longer-run national interests. Decisions on issues related to Japan are difficult for political reasons because of innate negative public sentiment in Korea. Still, actions taken in regard to national interests would eventually be appreciated.

The public must also become more open-minded to give the government more room to fight for national interests. The liberal voter base of the Moon Jae-in administration should first show its support. There is no hope for bilateral relationship with Japan if the government cannot exercise its best ingenuity in diplomacy.

The rooms are growing cold. The time has come to walk out and fix the fortress to minimize the damages from the storm. There is little time to waste.