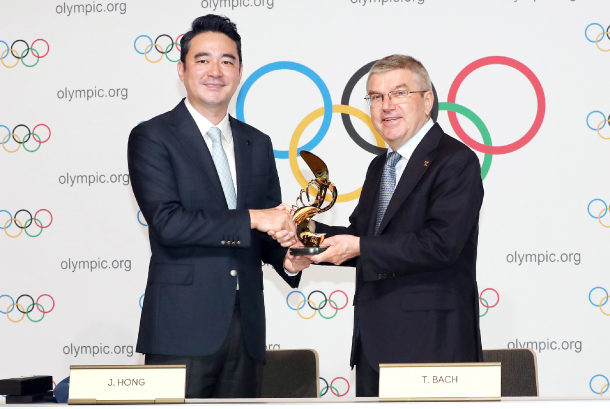 Hong Jeong-do, president and CEO of JTBC, left, shakes hands with Thomas Bach, president of the International Olympic Committee (IOC), on Tuesday in Lausanne, Switzerland, after the IOC announced JTBC won media rights for all Olympic games from 2026 to 2032. [JUNG SI-CHONG]

The announcement was made during a signing ceremony attended by IOC President Thomas Bach and the president and CEO of JTBC, Hong Jeong-do, at the Olympic Museum in Lausanne, Switzerland.

Neither group revealed JTBC’s bidding price nor whom the TV network competed against.

The agreement covers the 2026 Winter Games, the host of which is scheduled to be announced on June 24; the 2028 Los Angeles Summer Games; the 2030 Winter Games; and the 2032 Summer Games. It also includes all Youth Olympic Games within the period.

With the latest agreement, JTBC gained coverage rights over all media platforms related to the Olympics from 2026 to 2032. The cable network has promised that at least 200 hours of Summer Games and 100 hours of Winter Games coverage will be broadcast nationwide, the IOC said in a press release Tuesday.

The IOC press release continued that JTBC will support the IOC and the Olympic Channel, an internet television service operated by the IOC, on a year-round basis “to engage with future generations and promote sport and the Olympic values on digital platforms.”

JTBC announced in a separate press release that it will focus all its attention on enabling the whole country to enjoy the games through its TV channels and digital and social media platforms.

“Following the success of the Olympic Winter Games in Pyeongchang [County, Gangwon,] last year,” said IOC President Bach, “we have had unprecedented interest from media organizations in Korea. JTBC provided an innovative broadcast plan and demonstrated a clear passion for the Olympic value and a commitment to promoting the Olympic Games across the Korean Peninsula.”

JTBC President and CEO Hong said he was looking forward to working as IOC’s future long-term partner in Korea.

“It is our desire to greatly enhance current Olympic content and coverage and to be relevant to the all-important youth audience at all times,” said Hong. “We aim to ensure the widest possible audience and extensively broaden coverage for all sports. We fully share the IOC’s desire to build direct and ongoing relationships with fans in local markets.”

JTBC is an affiliate of the Korea JoongAng Daily and the TV channel of the JoongAng Group, the largest media group in Korea. The JoongAng Group operates a wide range of companies in media, entertainment and leisure, including newspapers, magazines, cinema theaters and resorts. The JTBC family includes JTBC2, which focuses on entertainment shows; JTBC3 Fox Sports, which covers sports; JTBC4, which mainly runs programs on fashion and lifestyle; and JTBC Golf.