Korea best Japan to reach quarterfinals at U-20 World Cup

Korea best Japan to reach quarterfinals at U-20 World Cup 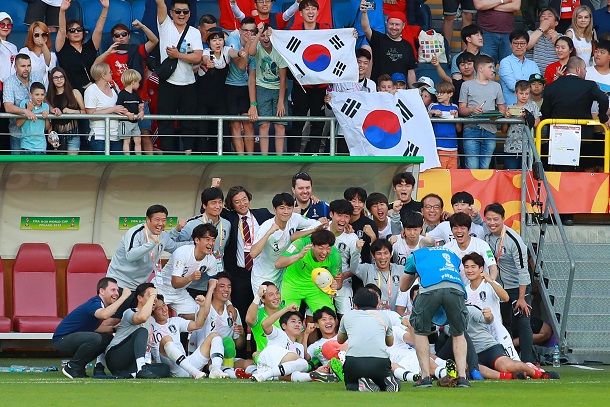 Korea’s U-20 football team poses for a photo after defeating Japan 1-0 in the round of 16 at Lublin Stadium in Poland on Tuesday. [YONHAP]

Korea’s U-20 football team successfully advanced to the quarterfinals by defeating its longtime rival Japan 1-0 at the FIFA U-20 World Cup at Lublin Stadium in Poland on Tuesday.

Starting the match with the same 3-5-2 formation that proved effective against Argentina during their last Group F match, Korea played defensively as they finished the first half 0-0.

Only five minutes into the second half, it seemed as if Japan had finally broken the silence with a volley from Yuta Goke, but it was quickly ruled offside through a Video Assistant Referee (VAR).

Following that, Korea finally made its comeback. Playing more offensively throughout the second half, Oh Se-hun broke the silence in the 84th minute with a header to lead Korea to a win.

This was the first time in 16 years, since 2003, that the teams have faced each other at the FIFA U-20 World Cup. At the time, the two faced each other in the round of 16 but Japan defeated Korea 2-1.

The win allowed Korea to advance to the quarterfinals for the first time since 2013.

With a win, Korea will be competing against Senegal in the quarterfinals in Bielsko-Biala, scheduled to start at 8:30 p.m. on Saturday, local time, or 3:30 a.m. Sunday, Korea time.