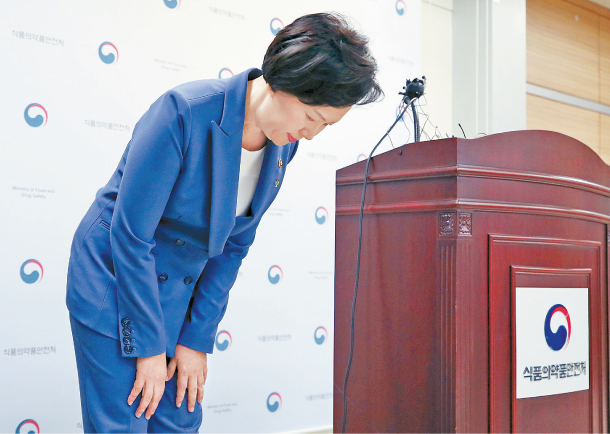 Minister of Food and Drug Safety Lee Eui-kyung bows to apologize for failures during the Invossa approval process during a press conference in Seoul on Monday. The ministry is in talks with the manufacturer to come up with a compensation plan. [YONHAP]

The Ministry of Food and Drug Safety apologized Wednesday over the mishandling of Invossa, a gene therapy drug that was found to be improperly labeled.

The ministry is in talks with Kolon Life Science, the manufacturer, to come up with a compensation plan for patients injected with Invossa in the event any side effects present themselves, said Food and Drug Safety Minister Lee Eui-kyung.

“We are sorry for causing chaos and concern to Koreans for not being careful enough in authorizing and checking up on Kolon Life Science’s Invossa,” the ministry said in a statement.

“The ministry will do its best to implement patient safety measures and prevent similar cases from happening in the future.”

The Drug Safety Ministry has requested Kolon Life Science submit by June 14 a 15-year plan for the tracking of all patients who have been prescribed Invossa, which is used to treat knee osteoarthritis. The gene therapy drug was administered to 3,707 patients in Korea and distributed to 438 hospitals and clinics.

The Wednesday announcement came after prosecutors officially started the investigation into the ministry and Kolon Group in regard to the scandal. The move came as a civic group reported the ministry for gross negligence in authorizing Invossa.

Investigators from the Seoul Central District Prosecutors’ Office raided the ministry building in Cheongju, North Chungcheong, on Tuesday and obtained hard disks and documents related to the ministry’s authorization of Invossa. The ministry made personnel moves when granting approval for the drug.

During an initial hearing held in April 2017, most of the experts rejected the drug for commercialization due to its hefty price tag and a lack of clinical proof that it actually regenerates joints. Only one committee member was for the commercialization of Invossa.

The drug eventually received the approval of six experts out of nine.

On Monday, the same investigators raided the headquarters of Kolon Life Science and the Korean unit of Kolon TissueGene, the U.S. affiliate, securing documents on the gene therapy drug’s research and development.

The prosecution is focused on verifying whether the CEO of Kolon Life Science, who is also the CEO of Kolon TissueGene, was aware of the presence of non-authorized kidney cells longer than the company claimed.

The gene therapy drug was granted approval for commercialization on the basis that it used cartilage-originated basis cells, not kidney cells. Company executives claim that they had no idea the kidney cells were present in the drug, only revealing the presence of the cells in early 2019.

But the ministry announced last week that Kolon Life Science received an email from Kolon TissueGene, its U.S. subsidiary, on July 13, 2017, that conveyed test results showing that kidney cells were present in Invossa.

If they received and read the email, it would mean that they had been hiding the problem for at least two years. Suspicious of the possibility, the ministry referred Kolon Life Science and its executives to the prosecution.

The problem for the Kolon Group affiliates don’t stop there as the government could ask Kolon Life Science to return funds provided for the development of Invossa.

If Kolon Life Science did not do due diligence in developing the drug, the biopharmaceutical company will be obliged by law to fully refund the government.

Kolon Life Science will be given a chance to comment on the suspension of Invossa on June 18.