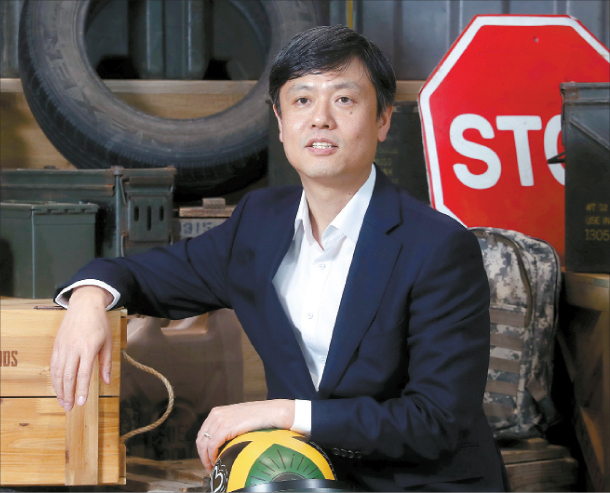 Chang Byung-gyu, Chairman of the board of Krafton

Gaming addiction will eventually be deleted from the disease classifications like how being a transgender was removed from the list of disorders, argues Chang Byung-gyu, the chairman of the board of Krafton, parent company of video game developer Bluehole.
After the World Health Organization (WHO) voted to classify gaming addiction as a mental disorder, the local gaming industry started actively opposing the organization’s ruling, saying the measure could cause a significant downturn in the industry.

Although the practical changes will be reflected in domestic policies from 2026 at the earliest, the industry feels that it could be stigmatized as something similar to illegal drugs. Organizations like the Korea Game Society and Korea Association of Game Industry immediately formed a committee to find out a common solution to the problem. At the press conference held on May 29, gaming industry insiders held a picture of a deceased “game” and wore black suits, holding a symbolic funeral for the gaming industry. Some even argued that games have become a scapegoat for the ills of modern society.

Yet Chang does not believe the effects of the ruling will be that severe. Chang, a parent of three teenage sons, has helped lead a Korean company that has provided services for highly popular global games like PlayerUnknown’s Battlegrounds and Tera.
He also sits as the chairman of the Presidential Committee on the Fourth Industrial Revolution.

“Gaming disorder will not be a type of disease in the future,” Chang said with confidence during an interview with the JoongAng Ilbo.

Chang contended that the WHO’s declaration will be a turning point for the gaming industry to look deeper into whether games have addictive features from a medical and scientific perspective. He believes that if policies are based on evidence and data, they would confirm that gaming is not harmful and that the local gaming industry will not collapse, contrary to popular expectations.
The following are excerpts from the interview.

Q. The gaming industry has long used the expression overindulgence over addiction. Do you think that the latter is inappropriate?

A. Addiction has two meanings. One meaning that the public commonly refers to is a state where a person games too much. It is similar to being addicted to coffee. The word “addiction” also has its own medical definition. Those two should be differentiated.

Are you saying that being addicted to games is different from the medical classification of addiction?

Drugs secrete a special substance to the body and cause brain changes, making a person unable to quit drugs. Unhealthy physical changes occur as well. That is addiction defined from a medical and scientific perspective. However, it is still controversial as to whether gaming addiction is truly like this. Another point is that drugs itself cause addiction. So does gambling. Yet aren’t games a little different? According to recent research, commonly cited factors that stop people from quitting games is academic stress and family issues.

The goal of gaming companies is to create highly sought-after games that people want to play all the time. How can you say that games are not addictive?

Sea Story is gambling though.

There are games that do not seem like gambling, but if looked at carefully, it could be gambling. It is necessary to have thorough discussions to sort them out. Without doing this job, treating gaming [as on par with gambling] as a whole is a problem.

There was a case where a young parent was busy gaming and left their baby alone, letting the baby die.

[It is unknown] whether the cause was the game or the person. If the object of addiction was not the game but something else, and a person overindulges in it, a similar incident could have happened. Yet, as I mentioned before, a very small number of games can have that kind of feature.

The WHO defined [gaming addiction] as a disease, beyond framing it as gaming disorder.

The history of computer and online games only amounts to 40 years at this point. It is not that long. The WHO’s decision, I think, triggered the dispute on how people should deal with video games. This moment could be a turning point lighting up the scientific and medical debates on gaming. The WHO deleted transgender from the list of mental illnesses, which was defined as a type of gender identity disorder. At first, the organization said it was a medical issue, but after long contemplation and discussions, it [reversed its original decision] and concluded that [being transgender is] one of several mental states.

Compared to the committee, which held a picture of a deceased video game, it seems like you do not consider the WHO’s announcement that serious.

The action of the committee has a historical background. People in the gaming industry worked with pride and a sense of identity that they are contributing to a high-selling export industry. However, since the last administration, people in the industry have felt that gaming was being treated like illegal drugs. They all said that after coming back from meeting with government officials. That kind of pent-up anger exploded this time.

Was the gaming industry nervous because of this kind of atmosphere?

For the last few years, when we conducted interviews of potential employees, we have asked the applicants whether their parents were opposed to them working in the gaming industry. More and more job seekers are saying yes. If this continues, it will be hard for us to recruit employees.

Will the discussion go the way that you hope?

I’m not talking about specific entities like the Ministry of Health and Welfare that agrees with WHO’s decision or the Ministry of Culture, Sports and Tourism that opposes the WHO’s ruling. We decided to create a private consultative body based on the Office for Government Policy Coordination. We fastened the first button well. I empathize with the prime minister’s announcement that the government will mediate. From now on, through the consultative body, the industry will speak up. Alvin Toffler said that there are six filters that helps us identify the truth. Those include consensus, consistency, science and so forth. Among those, science is the one and only thing that can rectify its own errors. Consensus is also important. But above all, it is a time when science is needed. I hope the consultative body approaches this with a scientific attitude. Shouldn’t the policy be implemented based on evidence and data?

From the industry, since the decision of the WHO, rumors have circulated that a shutdown law will be introduced. This law would forces gaming companies to not provide services during certain period of time. Currently teens under 16 cannot log in to PC online games from midnight to 6 a.m.

I hope this is not true. Actually, the regarding the shutdown law, I agree with the idea of protecting teens in principle. Yet, I think the government trying to force this is not a wise measure. We are living in an age where the government should not impose a curfew at night [like they did in the past]. The way to build autonomy is by carrying out literacy education which helps people understand the true meaning of games.

Many say that Korea’s gaming business is not doing as well as before.

I think you are comparing Korea to China, but China is backed by its tremendous domestic market. It is unreasonable to draw an analogy with Korea at parity. The nature of the gaming business is that the winner does not take all. It is because the elements that form fun are so diverse. A new company can spring up and compete. Yet, for a new company to develop, it must have global competitive power.

How do you view the gaming industry as the chairman of the Presidential Committee on the Fourth Industrial Revolution?

I have heard as a chairman of the committee [questions about] why I did not care about games during the parliamentary inspection. It is true that games are developed in relation with 5G communications and virtual reality. However, gaming is a field where the fourth industrial revolution is applied. Compared to autonomous vehicles, gaming does not have a great ripple effect. In that sense, it is controversial whether gaming should be dealt with by the Presidential Committee on the Fourth Industrial Revolution. Yet it is clear that gaming is a field that creates new value.