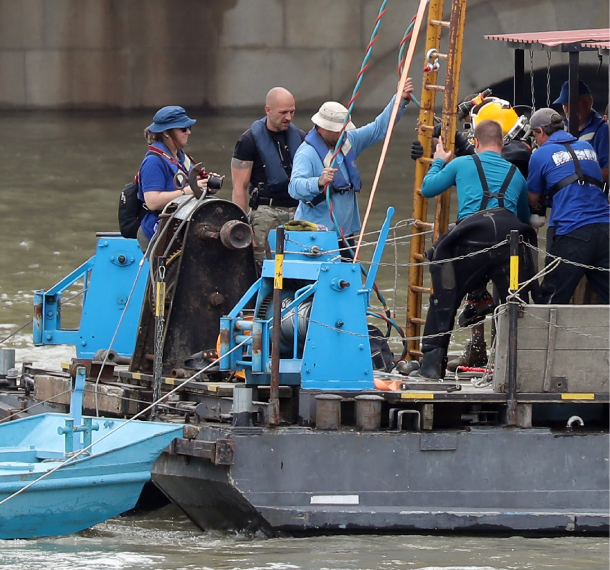 A Hungarian rescue team works to prepare to salvage the sunken sightseeing boat Hableany on the Danube River near the Margaret Bridge in Budapest on Thursday. [NEWS1]

The bodies of two more Koreans have been found from last week’s deadly sinking of a tourist boat in Hungary, officials said, raising the number of Korean deaths to 18 with eight others still missing.

The Hableany boat was carrying 33 Korean tourists and two Hungarian crew members when it capsized and sank on May 29 after being hit by a larger Swiss cruise ship from behind. Seven Koreans were rescued right after the accident.

On Thursday, three bodies were retrieved from the waters and two of them were confirmed to be a Korean man in his 60s and a woman in her 30s, the government response team from Seoul dispatched to the site told reporters. The third body was a Hungarian.

The Korean man was found 5.8 kilometers (3.6 miles) away from the accident site. The female victim was discovered 40 kilometers from where the ship sank. They were both found by local residents, officials said.

Search operations had been hampered by high waters due to heavy rainfall. The authorities sent divers into the river on Monday to search for the missing and start preparing for salvaging the ship.

Hungary has been working to lift the vessel using a crane, which has been docked at a quay close to the accident site. But high water levels are preventing it from being moved closer to the scene.

As an alternative, Hungary is also said to be looking into using a floating dock. Once the wreck is tied to it, a floating dock could submerge into the water and raise the ship as it returns to the surface.

Hungarian authorities said a final decision on salvaging will likely be made at the end of the week.