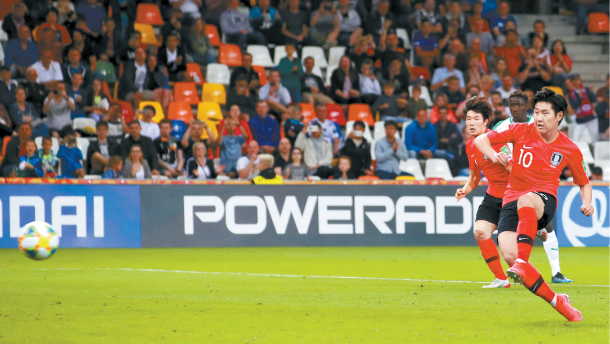 Lee Kang-in, right, converts a penalty against Senegal during the quarterfinals match at the FIFA U-20 World Cup at Bielsko-Biala Stadium in Poland on Saturday. [YONHAP]

For the first time in 36 years, Korea’s U-20 football team advanced to the semifinals at the FIFA U-20 World Cup by defeating Senegal in a quarterfinal penalty shootout on Saturday.

Senegal drew first blood in the high-scoring game, with Cavin Diagne’s 37th-minute goal giving the African side a 1-0 lead at half time.

Korea finally broke its silence in the 62nd minute with a penalty scored by Lee Kang-in, bringing the score to 1-1.

Shortly after, in the 76th minute, Ibrahima Niane allowed Senegal to take back its lead after the referee ruled Lee Jae-ik handled the ball in the box through the Video Referee Assistant. Although Korea’s goalkeeper blocked the first shot, he was given a yellow card for coming off the line too soon. Niane was given a second attempt and successfully scored to take the lead 2-1.

Right when it seemed as if Korea was about to crash out of the World Cup, Lee Ji-sol kept the young Taeguk Warriors’ hopes alive in the eighth minute of stoppage time, assisted by Lee Kang-in.

With the score tied at 2-2, the game headed into extra time.

This time, Korea was the one to draw first blood, with Cho Young-wook scoring in the 96th minute. Amadou Ciss followed up with an equalizer in injury time in the second half of extra time, taking the score to 3-3 at the last minute and forcing a penalty shootout.

Once again it was Senegal that took the lead. As Korea missed its first two shots and Senegal only missed one, it had a one-shot lead. But it came down to the last kicker.

As Oh Se-hun successfully scored his penalty shot and Diagne missed his: Korea was finally declared the winner of the 2019 FIFA U-20 World Cup quarterfinals, with the final penalty shootout score at 3-2.

With the win, Korea successfully achieved its goal of “AGAIN 1983” - the team’s motto for the tournament and a nod to the success of the 1983 U-20 team, which also reached the semifinals - and will now face Ecuador for a spot in the final.

“After the extra time ended, I told the players that it would all come down to their focus,” head coach Chung Jung-yong was quoted as saying on Yonhap. “I said I was proud of them for having come this far, but I didn’t want them to think it would be good enough. We had to clear this hurdle if we wanted to make the final.”

Although Lee Kang-in has only scored one goal throughout the tournament so far, he has definitely proved his importance for the team. Looking at Korea’s match against Senegal, Lee Kang-in added two assists and scored one of the three goals. Lee hasn’t missed a single game since the group matches.

“I couldn’t have done this without the support of my teammates,” Lee was quoted as saying. “And I want to make Korean football history with these guys. Before the shootout, I had confidence that my teammates could pull out the victory. I told them I had a feeling we’d take this one and I am so happy that we did.”

Aside from the FIFA U-20 World Cup, the senior men’s football team was the only other team to advance to the semifinals at the FIFA event, during the 2002 FIFA World Cup.

Looking at the U-20 team’s all-time head-to-head record against Ecuador, Korea is slightly ahead at two wins and a loss.

Most recently, Korea played a tune-up match for the FIFA U-20 World Cup against Ecuador and won 1-0, with Lee Kang-in scoring the winner.

In the round of 16, Ecuador defeated Uruguay 3-1, before winning its quarterfinals match 2-1 against the United States. Ecuador’s win against Uruguay was a big surprise as Uruguay was the winner in Group C.

Throughout Ecuador’s five matches at the tournament, Gonzalo Plata is the team’s leading scorer at two goals.

Although the South American team seems to be on an unstoppable roll, head coach Chung Jung-yong has confidence in his players.

“This isn’t a team that will go down so easily,” Chung was quoted as saying on Yonhap. “And it hasn’t happened overnight. Going up against some tough competition during the regional qualification hardened these players. And the players all believe in themselves.”

Once again, Chung emphasized that at this point, the tournament will come down to the players’ mental game as they are scheduled to play the semifinals with less than four days of rest.

“We don’t have much time left, but the opponents will be just as tired,” Chung was quoted as saying. “But these players are also mentally tough as any group of players I’ve coached. We’ll just have to continue to prepare for matches like we always have.”

Korea will play Ecuador in the semifinals at Lublin Stadium on Tuesday at 8:30 p.m. local time, or 3:30 a.m. on Wednesday in Korea. On the other side of the bracket, Ukraine and Italy will play each other in the semifinals at Gdynia Stadium at the exact same time. The final will be held on Saturday evening in Poland, or at 1 a.m. on Sunday morning in Korea.