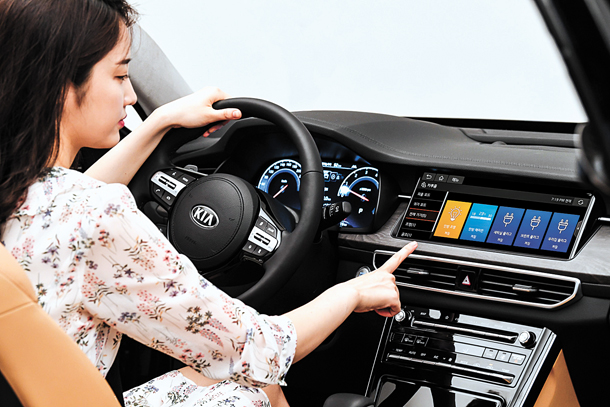 A K7 Premier driver tries out the infotainment technology featured in the vehicle, such as the car to home system that enables drivers to control household appliances from inside their car. [KIA MOTORS]

The feature includes a car to home system that enables K7 Premier drivers to control household appliances from inside the vehicle. Nature sounds like seascapes and rain will also be added as a new function in the upcoming automobile.

Kia says it will start accepting preorders for the K7 Premier later this month.

Drivers will be able to control household appliances like lights and air conditioners, as well as their boiler and gas circuit breaker. The car to home system can also be controlled with voice.

This technology will be provided based on the carmaker’s UVO connected car service, along with its partnership with mobile carriers SK Telecom and KT, as well as Hyundai E&C, which developed Internet of Things (IoT) system Hi-oT, and Hyundai AutoEver, Hyundai Motor Group’s IT service unit.

Setting specific modes to control a group of designated household appliances is also feasible. If the user sets up a mode for returning home, the home IoT appliances will automatically turn on devices like an air conditioner before the driver’s arrival at home.

Conversely, the system also enables drivers to control their cars at home. Drivers can voice order their cars to start before they get to their automobiles via artificial intelligence (AI) speakers from SK Telecom or KT.

Kia says it plans to expand its car to home and home to car services to its later releases.

“We hope the connected car technology featured on K7 Premier will evolve customers’ lives to a more intelligent [level],” said a spokesperson from Kia Motors. “We will continue with our efforts in developing technologies that can take care of customers’ emotions.”