SK deepens influence in Vietnam: String of investments could be preparation for future privatizations

SK deepens influence in Vietnam: String of investments could be preparation for future privatizations 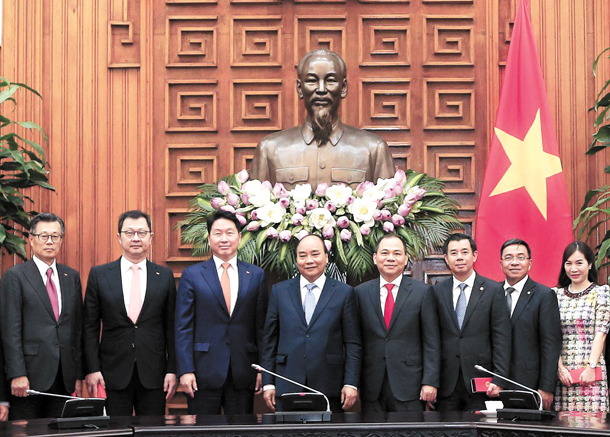 SK is putting up roughly one-third of the capital for the NIC, which will be located within an industrial complex in Hanoi, Vietnam, and will host some 40 major tech companies and 150 start-ups.

According to SK Group, the investment agreement was reached between SK Group Chairman Chey Tae-won and Vietnamese Prime Minister Nguyen Xuan Phuc during the chairman’s three-day visit to Hanoi last week. The trip ended on Friday.

The construction of the center will begin in the second half, with the NIC expected to open next year.

Chey’s visit to Vietnam last week has drawn much attention in the Korean business community, especially since SK Group has been expanding its presence in the Southeast Asian country.

Chey was accompanied by some of SK’s top brass on his visit last week, which came not long after SK become the second-largest stakeholder of Vietnam’s biggest conglomerate.

During the meeting, Chey emphasized future cooperation opportunities between SK Group and Vingroup.

The group of SK top executives on Thursday traveled to the Hai Phong economic zone, 90 kilometers (56 miles) southeast of Hanoi.

The economic zone is an industrial cluster that the Vietnamese government has been strongly pushing as the center of its growing automotive and ICT businesses.

Vingroup runs a smartphone and automotive plant within the economic zone.

SK Group is also the largest foreign stake owner of Masan Group after purchasing a 9.5-percent stake in the Vietnamese conglomerate in September last year for $470 million.

Observers speculate that Chey’s recent moves may be setting the stage to put SK Group in a favorable position to acquire state-owned Vietnamese companies that could one day be privatized.

“Even if a state-owned Vietnamese company is out in the market for sales, a Korean company wouldn’t be able to jump in on the bid on its own,” said a Korean official in the business community who requested anonymity. “It will only be able to participate through the stake it has invested in [a Vietnamese company].”

SK affiliates are already coming up with specific strategies to enter the Vietnamese market.

Kim Jun, SK Innovation CEO, on May 25 held a press conference in which he said the oil refinery plans to actively expand in Vietnam and Myanmar.

“Exports account for 60 percent of the petroleum business, but the export situation is worsening as even countries in Southeast Asia are now constructing their own refinery plants,” Kim said. “We plan to expand our petroleum product outlets by aggressively entering the domestic markets of countries like Vietnam and Myanmar.”

The heads of SK Telecom and SK E&S traveled to Vietnam for similar reasons. The telecommunications business is also a key industry that is usually closely monitored by governments. The Vietnamese government is currently working on privatizing some of the country’s key industries, including telecommunication and air carriers.