Moon embarks on tour of Finland, Norway and Sweden

Moon embarks on tour of Finland, Norway and Sweden 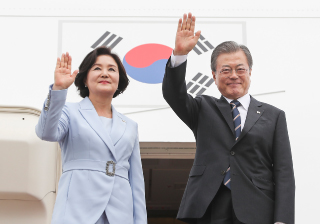 President Moon Jae-in, right, and first lady Kim Jung-sook, left, wave at Seoul Airport in Seongnam, Gyeonggi, on Sunday before boarding the presidential airplane to fly to Finland, Norway and Sweden on a weeklong trip. [YONHAP]

Korean President Moon Jae-in has embarked on a weeklong trip to Finland, Norway and Sweden, where he will seek to deepen partnerships on peace, and innovative and inclusive growth, on Sunday afternoon.

The president’s regional tour is “expected to become an opportunity to reaffirm cooperation with the Nordic nations in the process of achieving the complete denuclearization of the Korean Peninsula and permanent peace,” Deputy National Security Advisor Kim Hyun-chong told reporters.

It would also be a chance to broaden partnerships on innovative growth and the inclusive state vision, which are among the liberal Moon administration’s core policy goals, according to Kim.

Moon is scheduled to arrive in Helsinki, Finland, on Sunday evening for a three-day state visit.

He will hold summit talks with President Sauli Niinisto on Monday to discuss how to strengthen bilateral ties. The talks will be followed by a joint press conference. Finland is a mecca for innovative start-ups.

Moon plans to explore ways for substantive cooperation between Korea and Finland in connection with fourth industrial revolution technologies, such as 5G networks and artificial intelligence (AI).

He will fly to Norway on Tuesday, becoming the first Korean president to make a state visit to the nation.

King Harald V of Norway has invited Moon to visit there on the occasion of the 60th anniversary of the two countries establishing diplomatic ties.

Moon is slated to deliver a keynote speech at the University of Oslo on his nuclear-free Korea and peace vision on Wednesday, which falls on the first anniversary of the historic Singapore summit between the leaders of North Korea and the United States.

Moon’s address in the city, where late Korean President Kim Dae-jung gave his Nobel lecture in 2000, is likely to be the highlight of Moon’s whirlwind regional tour.

The next day, Moon will have a summit with Prime Minister Erna Solberg.

Among summit agenda items are the Korea peace process, hydrogen energy use, cooperation in the Arctic, and shipbuilding and maritime affairs.

The two sides plan to sign a memorandum of understanding on mutually beneficial hydrogen-low carbon economic cooperation, he added.

Sweden will be the last leg of his regional visit. He will attend an official welcoming ceremony, hosted by King Carl XVI Gustaf, on Friday morning, a day after his arrival in the country.

Moon is to deliver a speech at the Swedish parliament, called Riksdag, in Stockholm later Friday. On Saturday, he will have a summit with Prime Minister Stefan Lofven with a focus on Korea’s inclusive state campaign. Sweden is a role model in terms of cooperative labor-management relations as shown by the 1938 Saltsjobaden Agreement.

Moon and Lofven have chosen Saltsjobaden, a small town near the capital, as the summit venue.

“What will be discussed in the summit talks is ways for creating an innovative, inclusive nation, especially regarding science and technology, environment, welfare and gender equality,” Yoon said.

The president is returning to Seoul next Sunday.