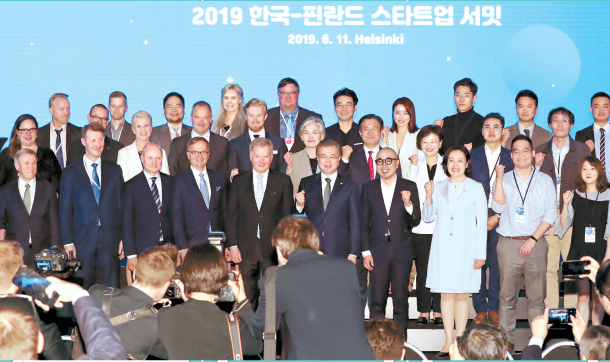 President Moon Jae-in, fifth from right in the first row, and Finnish President Sauli Niinisto, sixth from right, pose at a forum, held in Helsinki on Tuesday as part of a Korea-Finland start-up summit, which was attended by hundreds of CEOs from both countries. [YONHAP]

On his second day in Finland, President Moon Jae-in emphasized cooperation and exchange by innovative start-ups in the two countries while also mentioning the vast opportunities that will become available with denuclearization and peace on the Peninsula.

“Early on [Korean and Finland] laid the foundation for economic cooperation as the two countries in 1993 reached an investment promotion and protection agreement, and in 1997 a Korea-Finland economic cooperation committee was established,” Moon said Tuesday in Helsinki, where he attended a Korea-Finland start-up summit with Finland’s President Sauli Niinisto, where more than 200 start-up entrepreneurs from both countries participated.

The start-up summit was the biggest event during the president’s visit.

But he wants to further expand the cooperation between the two countries through innovation.

President Moon first mentioned the agreement made between the two governments in setting up a Korean start-up center in Finland, which he said would further expand the exchanges of start-ups from both countries.

On Monday the Korean Ministry of SME and Startups said it signed an agreement with Finland to set up a Korea Startup Center in Northern Europe. It is the third start-up center the Korean government has announced.

The first was in Seattle in August, and the second was in Gurgaon, India in September.

The Korean ministry said in a statement that the center will help speed up Korean start-up entry to the North European market.

The center will not only provide shared office space but also a platform for networking between Korean and North European start-ups. Korean companies will be able to hold investor relations events at the center.

President Moon also mentioned that the two countries have agreed on creating a joint venture investment fund that will help finance start-ups from both countries.

Moon said he expects a high level of synergy from cooperative partnerships in fourth industrial revolution technologies including artificial intelligence.

During his speech, where he praised Finland’s innovative transformation and success in overcoming the crisis it faced with Nokia’s struggle, Moon also mentioned Korea’s own successful changes.

“Such change in Finland resonates in Korea, whose own economic structure was centered on conglomerates,” Moon said. “The Korean government too is aiming to promote an innovative creative country,” he added. “We have kicked off supporting start-ups by creating a second boom expansion strategy and creating the Ministry of SMEs and Startups.”

He said these efforts have paid off, as Korea now ranks 11th among 190 countries and second in Asia for doing business.

“The number of newly started companies and total new venture investment have reached all-time records,” Moon said. “There are over 40,000 potential young entrepreneurs that are dreaming of start-ups.”

Before President Moon got on the flight to Finland, the Blue House emphasized that the trip was focused on start-ups, adding that a country that was once heavily dependent on Nokia has now transformed into a leading country in the world, producing over 4,000 innovative start-ups a year.

But start-ups and innovation weren’t the only themes.

“Korea hopes to expand exchange and cooperation with Eurasia and Northern Europe through peace on the Peninsula,” Moon said. While noting President Niinisto’s strong support of such peace, President Moon emphasized business opportunities.

“Once denuclearization and perpetual peace is achieved, the bilateral economic cooperation between the two countries will be limitless,” Moon said. “Many opportunities will be opened to businessmen from here.”