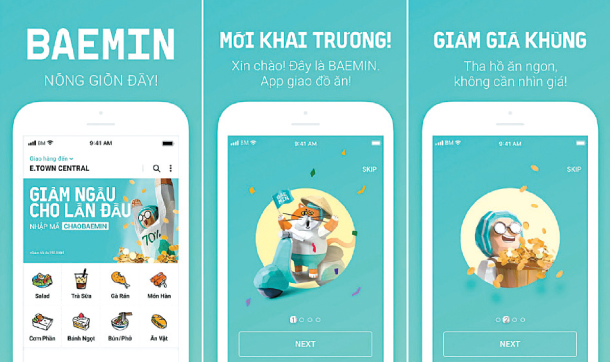 Its official launch as Baedal Minjok in Ho Chi Minh City came after a three week test run that took off in several parts of the city in mid-May. This beta version proved successful and led Woowa Brothers, the app’s operator, to push for an immediate launch after the test ended in early June.

“Vietnam has a very young, vibrant economy that’s showing solid growth … IT services are booming,” explained a Baemin spokesperson on why the company chose Vietnam for its foreign business.

“When it comes to food delivery, Vietnam already has a well-established infrastructure with motorcycles filling its streets. Culturally, Vietnamese people are also used to eating out or ordering food because cooking is often a burden in the country’s high heat.”

The company also said the launch comes at a time where relations between the two countries are in a positive phase, with the Vietnamese people’s perception of Korea and its brands enjoying a boost thanks to Park Hang-seo, the head coach of Vietnam’s national football team, and the popularity of K-pop groups and other Korean content.

“A lot of the Vietnamese customers already seem to know that Baemin is from Korea. Interestingly, they perceive the word ‘Bae’ as a Korean surname so that also gives them a hint,” said a Baemin spokesman.

The business had to close down a year later due to slow performance. The internal assessment back then was that the launch had come too early, when demand for food delivery in the country wasn’t mature enough to win over Japan’s high-quality convenience stores and readily available boxed meals.

With the lesson learnt, Baemin was more careful in selecting its next foreign business ground: A task force was sent to Vietnam last fall to find ways to localize the app and conduct thorough research on the market. This time, the company also decided it would be safer to acquire a local company with local expertise.

Launched in 2010, Baemin has always been the industry leader in Korea so this will be the first time it makes moves to penetrate an already competitive market.