U-20 team is just one game from history

U-20 team is just one game from history 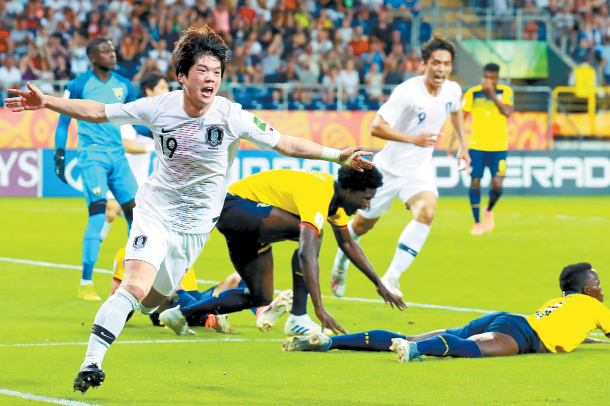 Choi Jun, left, celebrates after scoring a goal against Ecuador during the semifinals of the FIFA U-20 World Cup at Lublin Stadium in Lublin, Poland, on Tuesday. [YONHAP]

With a 1-0 victory over Ecuador on Tuesday night, Korea’s U-20 squad became the first Korean men’s team at any level to ever reach the final of a FIFA World Cup.

Korea’s only goal in the U-20 World Cup semifinal at Lublin Stadium in Poland came in the 39th minute, as Choi Jun scored with an assist from Lee Kang-in.

Neither team was able to find the back of the net for the rest of the game, although it wasn’t for want of trying. Ecuador repeatedly tested the Korean goalkeeper, with 13 shots, five of which were on target, throughout the game. Korea had just two shots on target.

Ecuador also came out on top in terms of possession in the semifinal, with control of the ball 61 percent of the time, but wasn’t able to make it count. Both teams had goals ruled offside within the last few minutes of the game.

“Every team in the semifinals has its own strengths,” head coach Chung Jung-yong was quoted as saying on Yonhap. “But after playing Ecuador in that earlier match, we were able to identify some of their weaknesses. They were sitting back a bit on defense, and I felt we could dictate the pace early on. It worked out great and led to our first goal, and then we tried to protect the lead in the second half.”

Korea faced Ecuador in a World Cup tune-up friendly on May 16, also winning 1-0.

“It’s such an honor to be playing the country’s first final,” Choi was quoted as saying. “Our goal from the start of the training camp was to win the title. Everyone, all the way from the starters to the substitutes, came together as one team. That’s how we’ve been able to come this far and we’re not done yet.”

Once again, Valencia CF’s Korean prospect Lee Kang-in proved his worth throughout the match. By adding another assist, Lee has now scored one goal with four assists throughout the tournament, allowing him to become a likely candidate for the Golden Ball Award.

Despite his outstanding performance, Lee thanked his teammates more than his individual ability.

“It’s been a long journey in Poland, and I’d like to thank everyone for playing so hard until the final whistle today,” Lee was quoted as saying. “We’ve been building for this moment over the past two years under a great coaching staff. We all felt we could pull this off if we kept our focus and play with urgency.”

Korea will now go on to face Ukraine in the final of the 2019 FIFA U-20 World Cup. If Korea wins the title, it will become the first Korean men’s team in history to win a FIFA event. Before the men’s U-20 team, the Korean women’s U-17 team was Korea’s first-ever team to win a FIFA World Cup in 2010, at the FIFA U-17 Women’s World Cup.

Although it’s already made history, goalkeeper Lee Gwang-yeon said the players are not going to get too excited as they have a bigger match ahead of them. Normally, goalkeepers don’t get much spotlight in football matches, but Lee Gwang-yeon has been receiving his fair share as he’s made multiple notable saves for Korea throughout the tournament.

“My teammates have been playing great in front of me,” he was quoted as saying. “We feel great about reaching the final, but we don’t want to get too cocky now. We’ll enjoy this tonight and then pour everything we have left into the one last match.”

Looking at the two U-20 teams’ all-time head-to-head record, Ukraine is slightly ahead with a win. The teams have only played each other once.

Korea isn’t the only country making history with a spot in the final.

This is the first time ever that Ukraine has advanced to the final - its previous best was reaching the round of 16. Despite its unimpressive all-time record at the FIFA U-20 World Cup, this year, Ukraine was a force to be reckoned with.

It first started the tournament by topping Group D with two wins and a draw at seven points. In the round of 16, Ukraine picked up a big 4-1 win against Panama and defeated Colombia 1-0 in the quarterfinals. Then, in the semifinals, it defeated Italy 1-0.

For both teams, a win will be a historic achievement. Interestingly, since 2007, the FIFA U-20 World Cup has seen a different country take the title at each tournament.

“Before the tournament, the players had a chance to learn what they were supposed to do and they’ve been making improvements as the tournament progressed,” Chung said. “These players will reach even greater heights. After this tournament, you’ll see these players take an extra step or two forward in their growth.”

The final match will kick off at Lodz Stadium on Saturday at 6 p.m. in Poland, or 1 a.m. on Sunday morning in Korea.