After a long wait, SOMI finally takes the stage: Having made a name for herself on TV and in I.O.I, she needs no introduction

After a long wait, SOMI finally takes the stage: Having made a name for herself on TV and in I.O.I, she needs no introduction 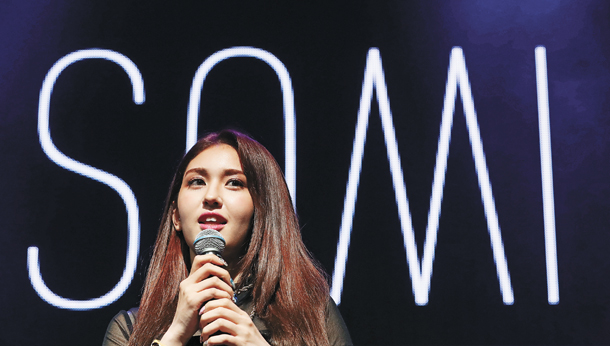 Jeon So-mi released her first single “BIRTHDAY” as a solo artist on Thursday under the name SOMI. Jeon is part of management agency The Black Label, a subsidiary of YG Entertainment, which includes Zion. T. [YONHAP]

Jeon So-mi is officially done with being one of Korea’s most high-profile idol trainees.

On Thursday, the long-time singer-hopeful finally released her own single EP “BIRTHDAY” under the name SOMI.

The singer’s first release comes with two tracks - title song and “Outta My Head.” SOMI composed and wrote the lyrics for “Outta My Head” herself, showcasing both her songwriting skills and expressive vocals in the R&B-style song. “BIRTHDAY,” an upbeat dance track, is co-composed by the singer and Teddy, lead producer of SOMI’s YG-affiliated management agency The Black Label, as well as Bekuh Boom, whose resume includes Blackpink’s “Kill This Love” and Taeyang’s “Eyes, Nose, Lips.”

“I’m very nervous now. It’s the first time in three years that I’m performing in front of the public,” SOMI said during an album showcase Thursday in eastern Seoul. “But I’m excited to show what I have.”

While SOMI’s name and face may be familiar to many Koreans, the singer has not officially made a debut as an artist until now.

In 2015, viewers were shocked when Jeon didn’t make the cut to join the girl group Twice even after ranking highly on the Mnet singing competition show “Sixteen,” on which JYP Entertainment trainees vied to secure a place in the group. For the next four years, Jeon’s popularity only continued to grow as she filmed commercials, ran in the 2018 PyeongChang Olympics torch relay and made several high-profile appearances on TV. Her fame skyrocketed when she placed first on “Produce 101,” the Mnet singing competition show featuring idol hopefuls from different entertainment companies. Jeon did perform and release music as part of girl group I.O.I after “Produce 101” along with the 10 other finalists, but the group lasted less than a year as it was just an extension of the show intended to help the singers gain exposure.

With “BIRTHDAY,” SOMI’s ready to give people what they’ve been missing.

Left: Jeon So-mi won first place on Mnet’s singing competition show “Produce 101” in 2016. Middle: The eleven “Produce 101” finalists, including Jeon, performed together for a year as part of short-lived girl group I.O.I after the show’s end. Right: Jeon was selected as one of the torch bearers for the PyeongChang Winter Olympics in 2018. [MNET, ILGAN SPORTS]

“Birthday refers to the day you are born, but it also refers to me being reborn as a singer,” SOMI said. “It’s a fun song about doing what I want on a special day. I thought it would be perfect as my debut song.”

In the colorful music video, the singer oozes confidence while sporting boxer braids and a fur coat, showing off a fierce look reminiscent of other female YG artists like CL and Blackpink. The song’s trendy instrumental and crisp vocals serve as proof of the degree of resources that went into making sure that SOMI’s long-awaited debut would be a success. The singer didn’t perform her title track live to the press on Thursday as is typical of album showcases, however, apologizing and saying that she wasn’t ready.

Jeon is the first female solo artist to come from The Black Label. The agency is currently home to the likes of Zion. T, Okasian and producer R. Tee - artists recognized for their music-making talents. A novice songwriter, Jeon said she received a lot of help on the album from her more experienced colleagues.

“I actually didn’t have any concept of what songwriting was, but Teddy and other producers helped me and it was fun,” she said. “I still struggled with writer’s block at times.”

The announcement that Jeon was signing with YG came as a surprise to many fans as they had expected the singer to eventually debut as part of another girl group under JYP. Unlike what rumors suggested however, the singer assured the press that the departure from her former agency was cordial.

“I think there were some differences in the style of music that JYP and I wanted to pursue,” the singer explained. “It was a smooth departure that came after a lot of discussion, and I’m cheering JYP on and I think they’ll be cheering me on as well.”

“When I had the first meeting with Teddy and heard him talk about all the plans he had for me, I was so touched that someone could be so thoughtful,” the singer added. “I don’t think there was a precise time when I thought I should go solo, but after I.O.I disbanded I was active independently. So I think it was a natural transition.”

Jeon revealed that she still maintains close contact with her I.O.I bandmates, most of whom have long since debuted in separate girl groups.

“The I.O.I members actually sent me many encouraging messages yesterday and today,” she said. “Doyeon called me via video call on the way and she was really excited for me.”

“It would be a lie if I said I wasn’t worried when other I.O.I members had already debuted,” Jeon admitted. “I was aware that time was ticking, but rather than being jealous, I helped my former teammates and I still had hope for myself.”

When the singer was asked about how she feels about the recent scandals beguiling YG, Jeon seemed unfazed, saying she was just focused on her debut.

“I’ve wanted to show myself as a singer for the past three years. I’m just so emotional and happy that my own songs are out. I think I’ll be crying non-stop when my music is released.”