HANAM, Gyeonggi - LG U+ made a bold marketing move Thursday by inviting reporters to test the quality of the virtual reality (VR) content offered by the country’s three mobile carriers.

The catch? Reporters had no idea which company created which content.

LG U+’s experiment is the first time that one company has publicly pitted its 5G services against its local rivals since the super-fast network was commercialized in April. LG U+, the country’s smallest carrier, has always said that 5G would be its opportunity to grow its market share, and calling out the two bigger carriers appears to be its first attempt at doing just that. 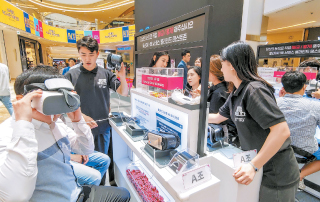 At an LG U+ 5G experience zone on the first floor of the Starfield Hanam shopping complex, there were several booths set up with three VR headsets labeled A, B and C.

As this reporter sat down at one booth, employees set up the three different devices to show VR content from the three carriers. Each reporter had to say whether they thought the content on A, B or C was best.

All three devices offered an opportunity to date famous K-pop stars, but all in slightly different ways. Eventually, this reporter picked option B as the best, unknowingly vindicating LG U+’s bold marketing ploy - the smallest carrier’s content really had come out on top.

The LG U+ video was the clearest and most immersive, standing out as both KT and SK Telecom’s content lacked definition. In both experiences, the faces of the stars this reporter was supposed to be dating occasionally blurred.

There were other booths where reporters could experience the quality difference in viewing cartoons or music concert on VR, but the result was mostly the same - LG U+ clearly beat the other two.

A spokesperson from LG U+ said that the comparison was held in a fair environment where all the conditions were the same, but the other two carriers quickly dismissed the tests, saying the environment was made to favor LG U+. Though SK Telecom and KT declined to officially comment, their spokespeople both said the tests cannot be reliable because they don’t know what kind of content or settings were used.

For this reporter, who has regularly tested 5G content over the past few months, the quality of the SK Telecom feed did seem to be noticeably worse than during previous tests a month ago.

Compounding the questions over the test’s legitimacy, an LG U+ spokesperson said that the carrier actually used high-speed Wi-Fi, not 5G. Also, all of the content was downloaded, not streamed, meaning improved connectivity - the entire reason for 5G - played no part in the test. It was really just about VR apps and content.

“We have been an early mover in media content for 5G phones and there can only be quality disparity because we have a core advantage from the VR video production process,” the LG spokesperson said.

LG U+ said its partnership with VR video maker Venta VR has greatly pulled up its content quality.

The test is open not only to reporters but to all consumers visiting Starfield in Hanam before June 20 and Starfield in Goyang from June 22 through July 14.

With over a million Koreans now subscribing to the super-fast network, the 5G marketing war is expected to get even fiercer.