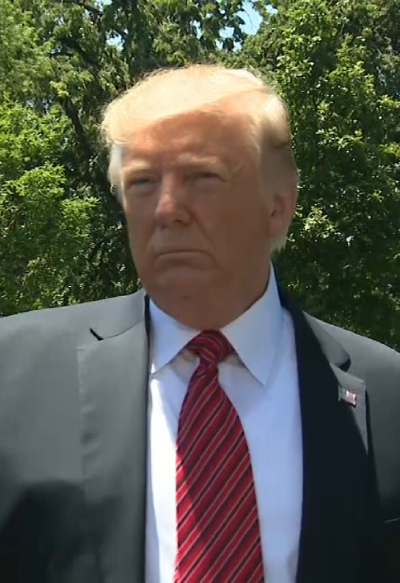 U.S. President Donald Trump said that Washington is going to “do very well” with Pyongyang “over a period of time” on the one-year anniversary of his first historic summit with North Korean leader Kim Jong-un.

But Trump, speaking at a joint press conference with Polish President Andrzej Duda at the White House Wednesday, underscored several times he is “in no rush” with the denuclearization negotiations, which have been at an impasse since his second failed summit with Kim in Hanoi, Vietnam, on Feb. 28.

Trump maintained that “sanctions are on,” as Washington earlier stepped up sanctions reinforcement in the United Nations Security Council by accusing North Korea of exceeding the cap on refined petroleum imports through illicit ship-to-ship transfers.

During the press conference, the U.S. president avoided directly answering whether a third summit with the North was in the works. Instead, Trump mentioned he “appreciated” the “very nice letter” he received from Kim recently, adding coyly, “Someday you’ll be reading about it. Maybe in 100 years from now, maybe in two weeks.”

Trump revealed the previous day that he had received a letter from Kim without revealing its contents. The two leaders have enjoyed a flurry of epistolary exchanges over the past year, and Trump at times has even revealed Kim’s letter in full, including in a tweet on July 12 last year, one month after their summit in Singapore.

The most recent letter led to some anticipation that the stalled denuclearization talks between North Korea and the United States will recover momentum.

While in Norway Wednesday, President Moon Jae-in said had been aware of Kim’s plans to send the letter to Trump and expressed his wishes to meet with the North Korean leader ahead of his own summit with Trump later this month.

On the same day, Kim Yo-jong, sister of Kim Jong-un, traveled to the northern side of the border village of Panmunjom to offer the North Korean leader’s condolences on the death of former first lady Lee Hee-ho, the wife of the late President Kim Dae-jung.

The first North Korea-U.S. summit was held on June 12 last year in Singapore and resulted in a four-point joint statement in which Kim Jong-un pledged his support for the complete denuclearization of the Korean Peninsula while Trump promised security guarantees for Pyongyang.

They were not able to produce any deal on Feb. 28 during their second summit in Vietnam as the two sides clashed over the scope of denuclearization needed for sanctions relief.

During the press conference Wednesday, Trump recalled that he and Kim started off with a “very rough relationship,” and that “it looked like it was going to be war with North Korea” which was going to be “quite brutal.”

He continued, “It was, really, a very dangerous situation. I consider it to be different now.”

Trump noted, “Now, I may change,” but added that “right now, we have a good relationship, and I think, probably, better than we’ve had for maybe 25 years, maybe forever.”

Trump, who has favored a top-down approach, insinuated that now is the best time to resolve the nuclear issue with North Korea.

But when asked by a reporter if he is committed to not spying on North Korea, Trump clarified, “No, it’s not what I meant.”

The previous day, Trump referred to reports that the North Korean leader’s older half brother Kim Jong-nam, who was killed in Malaysia on Feb. 13, 2017, had been a CIA informant, saying “that would not happen under my auspices.”

Also on Wednesday in New York, Stephen Biegun, the U.S. special representative for North Korea, held a closed-door meeting with representatives of the permanent five members of the United Nations Security Council, along with the UN ambassadors of South Korea and Japan.

Biegun, according to diplomatic sources, was said to have described Kim Jong-un’s letter to Trump and condolence message to former first lady Lee Hee-ho as positive signals in the Security Council meeting in which participants discussed the North Korea denuclearization issue.

But the meeting could be a move to pressure China and Russia, the two veto-wielding permanent Security Council members that have stood up for Pyongyang, to step up sanctions reinforcement on the North.

Reuters reported Wednesday that the United States and its allies submitted a report to the Security Council sanctions committee alleging that North Korea has exceeded its cap on refined petroleum product imports through illicit ship-to-ship transfers in violation of a UN sanctions resolution adopted in 2017.

The U.S.-led report, backed by 25 countries including South Korea, said that the North’s refined petroleum imports exceeded the annual cap of 500,000 barrels, and that there were 79 illegal transfers at sea this year.

A South Korean Foreign Ministry official said Thursday, “Regarding this, the Korean government holds the position that the sanctions on North Korea should be faithfully implemented. Allied countries share their concern over North Korea’s illegal maritime activities.”

Morgan Ortagus, the U.S. State Department spokesperson, said in a briefing Wednesday that Washington is “ready and willing to continue engagement on working-level negotiations with the North Koreans.”

“It’s a year today since Singapore,” said Ortagus, adding they are working on a policy that is “really the transformation of U.S.-North Korean relations.”

She also confirmed that Washington continues to maintain contact with North Korea including through its so-called New York channel, or its mission to the United Nations.

“We hope that the commitments that we made one year ago will come to fruition, and we’re certainly ready on the working level to do that,” she said, adding, “while we work towards that, economic sanctions do remain in effect.”