Yook Geun-soo, who works on the engine line at Renault Samsung Motors’ factory in Busan, expressed concerns over the influence of the hard-line militant Korean Confederation of Trade Unions (KCTU) during the recent standoff.

“I thought it would be a major problem as the Renault Samsung Motors’ union representatives were trying to push the demands of the KCTU and the Korean Metal Workers’ Union over the interests of our own union workers,” Yook told the JoongAng Ilbo. 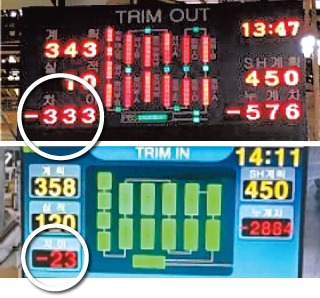 Circled numbers show how far the Renault Samsung factory in Busan had fallen behind its production targets on June 7, the first day of strikes, top, and June 12 as workers defied orders to continue walkouts. [SONG BONG-GEUN, LEE EUN-JI]

“Even during a Q&A session, the head of our union, Park Jong-kyu, went on giving answers unrelated to the benefits of our union members.”

Renault Samsung Motors and its labor union have been locked in a dispute over wages and working conditions. The union announced a full-fledged strike, but the attempt ended in vain as union members decided to fight against the decision.

The company and the union were able to reach a tentative wage deal late Wednesday. Final voting on the deal took place on Friday, but results were not announced as of press time.

The turn of events could be seen as a revolution by union members. At the center of the friction between the union’s executive committee and its members stood the umbrella union, KCTU.

There are two unions under Renault Samsung Motors. One is the Renault Samsung branch of the Korean Metal Workers’ Union under the KCTU founded in August 2011. The other is a non-affiliated union established in August 2012 that is not part of any larger organization. While the former generally showed a more hard-line attitude, the latter was perceived to be more practical.

Workers at the automaker preferred to side with the unaffiliated union. Over four years of competition between the two unions, about 2,000 workers have signed up to join the unaffiliated union, while just 200 people joined the KCTU-linked union as of 2014. Unsurprisingly, the larger union secured the right to negotiate with the company.

Problems arose when the KCTU-linked group changed tactics. In April 2016, 80 percent of its members left the hard-line union to join the larger, unaffiliated union.

“It seems the members of the KCTU union moved into the competing union to take control, playing the strategy of the Trojan horse,” said Kim Tae-gi, economics professor at Dankook University.

It took two years for the members that moved over to take control of the non-KCTU union. According to the union’s election rules, members are able to run for candidacy to become the head of the union after two years of membership.

The former KCTU-affiliated officials may have left the hard-line union, but they didn’t give up its tactics.

The unaffiliated union’s management committee - all formerly associated with the KCTU - demanded the union adopt negotiating rules used by unions under the KCTU. They also demanded it join the KCTU.

The new leaders also pushed for an aggressive fight with the company management through all kind of strikes, which was not supported previously by the non-KCTU union.

With members of the unaffiliated labor union unhappy with the hard-line approach of their new leaders, the union and the company was able to reach their first tentative agreement on a wage deal on May 16. When a tentative agreement is reached, a union’s executive committee usually encourages its members to vote for the deal.

That wasn’t the case, however, for Renault Samsung. After the tentative agreement was announced, the head of the labor union apologized for “accepting the tentative deal … that is not satisfactory.”

He also made other comments encouraging union members to vote against the deal.

“The labor union used voting on a deal the union and the company agreed on as justification to go on strike,” said Lee Jae-kyo, a professor of interdisciplinary studies at Sejong University. “It is an act that harms the trust between workers and management that cannot be justified.”

The first agreement fell apart after voting, and the labor union pushed for a full-fledged strike. However, union members had lost faith in their leaders. Some even discussed impeaching the heads of the union.

In the end, even the militant executive committee of the labor union surrendered during renegotiations with the company late Wednesday, ending a year of strong protest.

After such a long and drawn out protest, the union leaders agreed that members would abide by the principle of no work, no wage, and in return get a maximum of 800,000 won ($675)worth of incentive pay per worker.

“We don’t need a labor union that cannot represent what workers really think,” a 47-year-old member of the Renault Samsung labor union surnamed Kim said. “The current executive committee only follows the orders of the Korean Metal Workers’ Union rather than reflecting the will of the workers.”